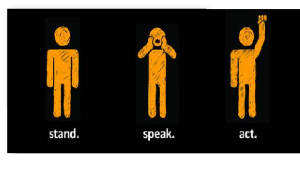 For the record, I’m not against bystander intervention.

What I am against is you not having your shit together enough to do whatever it takes, whatever the cost BEFORE you step in. If you don’t, can’t and aren’t ready for the price, then the only thing physically intervening is going to do is create another victim… you.

Actively ‘stepping in’ requires a whole lot more than you in liver quivering self-righteousness, standing there saying, “Hey man! That’s wrong!” and expecting that to make it all better.

On the other hand, calling the cops and filming isn’t a bad idea ( remember to cloud it or e-mail the video to the cops, because the cops taking your phone with the evidence is real common). BTW, if you aren’t willing to bust him on the back of the head, telling/threatening the dude you’re filming ISN’T a good idea either.

One of the bigger problems that I have with the concept of bystander intervention is it’s a reaction to a lie. A lie started by social scientists and the media pontificating on the murder of Kitty Genovese
https://en.wikipedia.org/wiki/Murder_of_Kitty_Genovese

Then saying “oh bad, bad, bad.” People were told how horrible they were for not intervening. You should do something. Like …oh say… walk into the lion’s jaws.

Well guess what? Those people you’re telling to intervene don’t have what it takes to do much more than bleed. This ain’t the kind of thing you self-certify yourself as “I’m ready to handle.” It’s something you have to have done a lot of work, have things already in place before you even consider stepping in.

Starting with the fact with knowing that there is not one ‘pat’ answer about what to do. Before you even THINK of intervening, know that there is a spectrum of violent circumstances. What works in one, fails in another. What is enough force for one situation is too little for some, too much for many others. You HAVE to look and assess the circumstances and level of danger BEFORE you step in. Otherwise you’re going to find out the hard way that you valiantly stepped up and into a situation you should have shot the (first) bastard in the back of the head without warning.

I will also point to the BJJ instructor who got shot in the head when he tried to apply a rear naked choke against a robber. You don’t use such a petty level of force when weapons are involved. Snap his neck as you’re piledriving him into the ground, maybe. A “My dick is so big I leave drag marks” sports move? No.

The flip side of that same coin is that most situations will evaporate if you step up — WITH awareness of the level, the willingness to do what it takes, and knowing full well the cost of it going sideways. A cheap local equivalent is often found with having some MA/MMA/boxing training. As it will buffalo most punks and assholes

That’s why knowing HOW to assess the situation is important. If it’s outside your paygrade, don’t jump in. Otherwise…

In 1996, I was up in Billings Montana, kids were with me, Talon and Cheyenne. He was 4 and she had just turned 2. We were in town going to a store and I watched as two skinheads harassed a elderly black couple calling them all kinds of names. The big one had a Southern Cross on his vest and when I asked them to stop they started calling me names one of which was nigger lover.

Now folks I am so southern I am kin to myself. I had family member die in the War of Northern Aggression and I had read what few letters that are left and accounts told by family members. Not one time did I ever read that these men had anything against black folks or that any of them had enough money to own slaves. But I did read of how they fought for what they believed in and right or wrong that always stuck with me.

So I told the big one that if he didn’t stop his shit I was going to feed him his dick. Him and his buddy left the elderly couple alone and thought the best course of action was jumping on me. One of them got curb stomped and the other on wound up with both his legs up on a curb and I jumped on his knees.

One of the main things that perturbed me was the larger dumbass wearing that SC and acting like a fool. Now I had one (Southern Cross) on my belt buckle and was wearing a confederate gray Stetson. I asked the folks if they were ok and was checking on them when the cops showed up.

Figured I was jail bound and asked the couple to call my wife and gave them the number. Turns out the man was the head of a large church in Alabama and they both told the police how I saved them from attack. Didn’t go to jail. Wife wouldn’t bail me out anymore. I got back into the truck and Talon said, “Daddy you was a standing on that mans head is he ok?“. Said he was fine and we left.

Moral of the story I guess is that not all us backwards ass southern boys are the same.