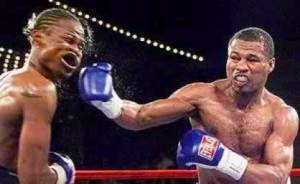 Clinching is a common response when you get your chimes rung. It hopefully will keep you from getting torn up more while you try to get your brains back inside your ears. It’s pretty much all you can do unless there’s something like a table nearby that you can roll under and try to recover.

Thing is if you’re still on your feet OTHER than a clinch where you get both arms, there’s NOT a whole lot you can do to stop the other guy from pounding you as hard as he can. Your hanging on hampers his movement and keeps him from hitting you harder. He’s still going to try to nail you more — and he probably will. So accept you’re still going to get hit while clinching. That’s the bad news.

The good news is most people suck at short range power generation. So while you’re still going to get hit, clinching MIGHT give you time to get your shit back together and get back into the fight.

More bad news. Against someone who knows short power generation trying to clinch just adds to the suck. That’s to say, “he hit you that hard out there and he hits you just as hard up close.” You go in to recover and shit just keeps getting worse until you drop.

More good news, even if you can’t rally enough to get back into the fight, you can change a crash and burn into an emergency landing.

The trick on that is to hang on long enough to recognize that your power levels are still falling or not likely to recover in time to reengage. This part is important, let go BEFORE your systems fail. You’re hanging on and realize you’re still going to go down. Let go while you still have enough juice to fall into a floor fighting position. This is either on your back or side with your legs pointing towards him so you can lay there and keep him at a distance. While you’re down there you can both — hopefully — hold him off and recover.

Clinching or falling into a ground fighting position is — at best –damage control. It’s an emergency stop gap measure that may or may not work.

What you can do to keep from getting into that “Oh shit” situation is learn how to roll with and shed punches. I make a very important distinction between impacts and drives. An impact is a hit that delivers all of it’s power into a stationary target. It does so in a VERY short time. In out quick like a duck mating. It’s NOT the amount of force that makes an impact hurt, it’s how fast that power is delivered

You soften the damaging effects of an impact by making it take longer.

Try this hold you left hand up, palm facing you. Then with your right hand, do a fast punch into your palm and pull back JUST as fast. It’s a snapping/whipping action.

Now you’re going to do it again, just as fast. But this time instead of pulling back, push through with your right fist. Move your left at least a foot.

That hurts less doesn’t it? Here’s the thing, there’s JUST AS MUCH force in both moves.
The first one is like a pier getting hit by a tidal wave. By being stationary the force is hitting it all at once. It may or may not survive. But the second one — while there is an initial impact — translates it into a less damaging (and less painful) push. By letting your left hand move like a kayak before a wave it extends the time of force transference — which hurts less and minimizes both shock and damage.

The thing is way too many inexperienced fighters and sports martial artists DON’T know how to roll with punches. Instead they try to stand there and take the punch. OR they’re so busy attacking that they ignore incoming fire until they end up hanging on like you did.

Another option to consider is something that nobody wants to admit.
Did you do a Three Stooges Knock Out?

You seldom see these in boxing matches. But they are WAY too common among MMAers. This is because unlike boxers MMAers have to divide their defenses to cover more target space. This leaves them real vulnerable to pulling 3 Stooges.

That is to say they knock themselves out.

Like Curly, Larry or Moe slamming their face into an extended pipe/bar/beam a LOT of people literally run face first into the other guy’s fist. It’s not the force of the punch that rings their bell it’s them running into it. Their forward momentum is supplying the force, not necessarily the punch. (This is also known as leading with your face.)
Here’s the thing about that. Let’s stick with just the upper body. You have a left and right arm as well as sides. If you punch with your right, your left is still there protecting your left side. The weakest part of your defense is on your right side. In fact, since your right arm is so busy attacking, there’s a gaping hole in your defenses. (That line “The best defense is a good offense” is bullshit.) You may be charging forward with your right side attack, but anything coming in on your right is going to get through.

You run the risk of getting clobbered this way unless you tighten up your defenses and practice target denial (For example, when attacking you turn your body so your left side is out of range. This makes it safe to move your left hand over to protect the right quadrant to handle any incoming counter-attack).
I hate to tell you this, but if you got hit hard enough to give you Jell-O knees in a fight, odds are you did a 3 Stooges on yourself.

So if you’re going to be fighting …

1) tighten up your defenses when you’re attacking,
2) learn how to roll with and shed punches
3) learn how to clinch to better limit his movement
4) learn how to do emergency landings instead of crashing.

Oh yeah and accept that if you’re going to fight, you’re going to lose now and then. That’s the price for playing that game. If you’re lucky, you just lose the fight. If not, you get stomped. If you ain’t willing to play for those stakes (or do the work to learn how to minimize the damage), don’t play.