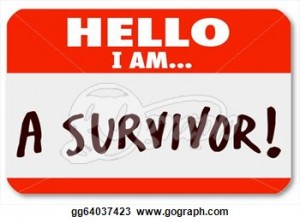 I have a serious problem with the abuse of the word ‘survivor.’ Well, more specifically people who have extremely limited experience with violence trying to ’empower victims’ by calling them survivors. See thing about being a survivor is there’s this little complication called death.

As in, you die if you don’t get off your ass and do something (including not giving up). Plan B is receive assistance from someone who knows what to do to keep you from dying. So I have no problem saying someone is a survivor of being shot. Same with someone who lives through a high speed crash. Now granted the latter may just be that the person took the step of putting on a seat belt and the EMTs and ER staff did most the work.

My fundamental issue with the initial watering down the concept of being a survivor is that it then becomes trauma-drama-esque. A lack of coping skills (and often good decision making skills) becomes an acceptable approach to life. One that is arguably encouraged by not helping people overcome past trauma, (much less avoid such situations in the future), but to self-identify themselves as victims. Basically, you end up with a system that manufactures ‘victims.’ Not by the event, but by the aftercare.