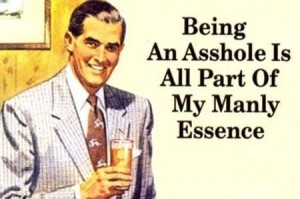 With that simple line, I figured out something that has been bothering me for years. Something that it took Conflict Communications (http://www.conflictcommunications.com ) to put into perspective.

When it comes to violence, there has always been something about Gavin DeBecker’s approach that bothered me. From a ‘victimized by an asocial predator’ perspective, it made sense. People knew something was wrong, but they didn’t want to appear rude. They allowed the bad guy to develop the situation, and bad things happened. OK, no problem, no disagreement. Seen it happen.

When it comes to the way violence happens, this I have seen — not just more of but a thunderin’ herd more.

Let’s start with something I noticed back in the day when screwing up meant I’d be spitting blood. It’s something that just whizzes past most people’s self-awareness; not only in application, but in training, too, (which is kind of ironic when you think about how many instructors tout their emphasis on ‘situational awareness’).

That is: An overwhelming majority of violence comes with instructions on how to avoid it.

This isn’t in some kind of obscure coded lingo. The directions are pretty straightforward and understandable. This applies to both social and asocial violence. (Read Rory Miller’s version*, not the macho bastardization out there.) A resource predator (mugger) who sticks a gun in your face and says, “Gimme your wallet, or I’ll blow your head off” is telling you how to keep from getting shot. Give him your wallet. Not too hard to figure out.

Someone who says, “Shut up or I’ll kick your ass'” is giving you instructions on how NOT to be assaulted.

He is not, I repeat NOT, asking you to comment about his testicles on his mother’s chin. Nor is someone who tells you, “You better leave” interested in hearing a dissertation on your right to be there or questioning him about who he thinks he is to tell you to leave — or, of course, his sexual practices with his mother. While we’re at it, the mugger with the gun isn’t interested in your sharing your opinions with him, either.

(Keep this in mind. There will be a test later. A test, if you fail, will mean you’re going to end up bleeding.)

Take a good hard look at your reactions. Nothing I mentioned is within the conditions set to avoid violence. Come to think of it, they’re deliberate violations of such standards — as well as being emotional, hostile and insulting. And these to a person who just told you what will happen if you don’t changeyour behavior.

Not too smart is it?

But here’s the problem. How do you tell people who pride themselves on being intelligent, self-aware, sophisticated, educated and in control of themselves that they’re acting like pissed off monkeys?

And furthermore, how do you let them know that in tense situations this pissed-off monkey will take control of their consciousness and behavior at the worst possible time? And that — no matter how smart or in control of yourself you think you are (sitting in comfort while reading this) — you’ll do this exact kind of emotional monkey brain behavior when you find yourself in a situation where the monkey feels threatened?

Rory likes to say, “If you think you are in control of yourself, you won’t feel the need to exercise self-control.” For once, I’m going to be more laconic and say, “We all get stupid when the monkey takes over.”

The hardest part is recognizing our behavior for what it is. While there are several strategies we can follow when the monkey takes command, they ALL feel like the absolute, 100 percent right thing to do — including being an aggressive, obnoxious asshole

There’s an analogy that works here. Recognizing when you’re being an asshole is like seeing the back of your own head. You can see it in others, but it takes specialized steps to see it in yourself.

I’m not talking about the trendy, pseudo-self-aware admission that you can be an asshole. I’m talking about being so self-righteous and certain of both what you are doing and what effect it will have — you actively misinterpret the fact the dude is getting ready to throw you down the stairs.

Let me restress that point. It’s not that you don’t see it or choose to ignore it. You see it AND you react to it. But your reaction is in the suave, sophisticated and educated terms of: Fuck this other monkey! He thinks his dick is big enough to tell me what to do? I’ll show his punk ass where it’s at! My dick is way bigger!

And this, let me tell you, really sounds silly coming from a woman …

But that is, in essence, the core of the message. Coming from either sex, it’s immature, insecure, hostile and aggressive. And yet this is how the monkey views being challenged or threatened.

Except unlike the other guy (who is a complete asshole), your monkey will tell you YOUR behavior is perfectly justified and warranted. This is particularly ironic because in the classic game of ‘escalato,’ your monkey is going to raise the stakes by becoming even more insulting, obnoxious and threatening.

I’ve had to pull many a person off from eating someone’s face while thinking to myself (about the other guy), “Where are you from that you DON’T expect to get assaulted for saying (or doing) what you just did?”

One of my favorite examples is when I talk about ‘developing attack range’ as being a serious pre-attack indicator. Oh, everyone now knows to look for the other guy trying to develop range in preparation for launching an attack. See how smart and aware they are? Well, yeah — except who developed attack range by stepping up into the other dude’s face and snarling a threat? It was them! They threw out the ‘I’m about to attack you’ signals by developing attack range.

And then they blame the other person for going ape shit on them.

Let me get this straight. Despite the fact you developed attack range, got up in someone’s face and threatened him — that person is supposed to use his psychic abilities to know you weren’t really going to attack him? It’s all the other guy’s fault. More than that, I am supposed to accept the rationalizations that the only reasons you engaged in these behaviors was because you were afraid, felt threatened and your feelings were hurt?

Guess what? The cop ain’t gonna buy it, either.

Yet, this is what happens when the monkey takes over. You can talk about situational awareness all you want as though it is some kind of external standard of danger — which technically it can be — but a far more important form of situational awareness is recognizing when there are two assholes involved in the situation. And you’re one of them.

Do NOT presuppose you’re being a good guy. Because when your monkey brain hijacks you and turns you into one of two assholes, you have zero situational awareness. Anger is going to blind you to warning signals and indicators FAR better than anything Gavin deBecker told you about your gift of fear.

This is a great example of a systemic “hole” in most self-defense strategies including my 5D’s of Self-Defense. The strategies make the assumption that the Target doesn’t in anyway encourage or influence the aggression/assault to occur. The idea of DETER is to actively ward off/dissuade/etc. The assumption is always that the situation is between an innocent Good Guy and a malicious Bad Guy. But what happens to the strategies when the Good Guy’s Monkey takes over and DETER becomes UN-DETER?

Here are a few videos of people being assholes before being assaulted:
Street Heckler , The Razzer , The Insulter , The Trouble Maker , The Annoying Man