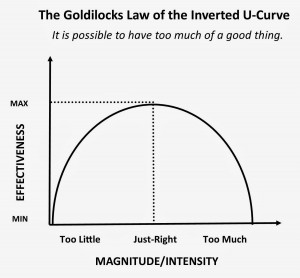 It’s not rocket science by any stretch. It is a simple concept. In many situations, after a certain point increasing the magnitude or intensity of a particular factor results in a negative decrease in the overall effect. But before the point, the increase corresponds to a positive increase in overall effect.

Take in Too Little calories and you are skinny. Take in Too Much and you get fat. There is a Just-Right amount of caloric intake that helps you maintain your ideal weight.

There are so many examples of the Goldilocks Law that it is helpful to think of an example of what doesn’t fall under the Law.

Judgment and decision making skill and ability, you really can’t get too much of that.

Food for thought:
How many arguments and disagreements are the result of people viewing the situation from different sides of the Inverted U-Curve. In other words, people with seemingly opposing viewpoints may actually agree on the fundamental concept. But they may disagree on whether a certain (known, perceived, imagined) quantity of that concept is actually positive or negative.

The  Goldilocks Paradox is made up of two parts. Goldilocks means that every instance of interpersonal conflict has an optimum response that falls in the range of not being too much and not being too little. It is “just right”. A response that is too much can escalate the situation unnecessarily. A response that is too little can be ineffective and allow the situation to escalate. The Paradox is that while the majority of conflict resolution and self-defense techniques, tips, and advice taught by “experts” may have validity, they are unlikely to be “just right” for the individual and the particular situation at hand.