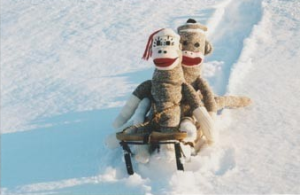 The following is an excerpt from In the Name of Self-Defense.

If you aren’t careful that aggressive and threatening person can be you.

I tell you this because of what I call the Monkey Slide. And this is not uncommon after people have taken Conflict Communications training. Fresh and ready, they’re aware of their monkey and proud of themselves for staying in control. Then they get into an incident where their monkey flat-out hijacks them. I’m often told, “I knew what the monkey was doing. I just couldn’t stop myself.” It’s like unexpectedly finding yourself on a slide, and you don’t know how to stop. You’d think this monkey slide would be first hand experience about how powerful the monkey can be about hijacking our actions. Truth is, it’s probably the first time you’re consciously aware of it. We’ve actually been letting the monkey take control like this throughout our lives. But ordinarily, we don’t try to stop it. Add to this, we’re not consciously aware of the difference between our human mind and a monkey hijacked emotional reality. The Monkey Slide is just becoming aware when it’s happening. Now the good news it takes a little practice, but you can develop the ability to stop yourself from sliding.

***
That enraged monkey is in control until another part of your brain kicks back in. The speed that the monkey will break its own carved-in-granite rules shows how subjective and conditional these rules—and who we tell ourselves we really are.

I recently talked to someone who—having read all our works, being aware of the monkey, hearing about how powerful the monkey can be, and priding himself on how well he could ‘control’ his monkey—had a little . . . incident. He found himself screaming at a guy, slamming him up against a wall by his throat, and by his description was “unable to stop myself.” He kept telling himself to stop, but he kept going.
I told him he’d just encountered the “monkey slide.” That is when you intellectually think you understand the power of the monkey, but it hijacks you anyway. The first time you experience this, it’s like unexpectedly finding yourself on a slide and not knowing how to stop. You discover how strong the monkey’s control over you is as you’re uselessly scrabbling, scrambling, and flailing while trying to stop.

While it can be stopped, intellect alone isn’t enough. As the person who experienced the slide found, it takes an act of will. An act more ferocious and committed than what he was doing to the other guy. Stopping a Monkey Slide requires more commitment not to do something than the part of you that really wants to do it. In his case, slamming the guy against the wall was easier than stopping himself. With others, it’s stopping from saying or doing something that is hurtful and wrong.

People Monkey Slide all the time then claim they just couldn’t help themselves. Codswallop. The majority didn’t want to. Even if they did, their monkeys wanted what they did more. When you see it in others, it’s easy to spot. But now when you find yourself sliding, you have to acknowledge you are letting the monkey drive the bus—and the consequences will be yours.

So, why all this? When you have the ability to end another human’s life, your self-control must be more powerful than your monkey’s urge to do it.