The Progressive Fence is a model for understanding how to communicate and enforce limits on unwanted behavior during interpersonal conflicts and confrontations. It all starts with the Visual Fence of body language.

We can talk about the importance of walking with purpose, being alert and aware of our surroundings, and projecting confidence.  But that is not what really happens, especially among many women. They look down, away, and avoid eye contact. They pretend to be busy by being on the phone, texting, or listening to earphones.  This type of behavior will not change.  It is a conditioned response. It is done for a reason.  These actions communicate to others to not engage or talk to them. And most of the time it works. The reason why the behavior will not change is because it works most of the time. It is a socially conditioned response.

This use of body language is a Visual Fence that is designed to communicate that the person does not want to be talked to, or interacted with in anyway. A Visual Fence uses body language to send a message.  It is highly efficient.  Most everyone who sees it knows what it means.  But it can be easily disregarded or purposely ignored. This fence depends upon the Rules of Behavior being respected in order to be effective.

The police use the Visual Fence to limit unwanted behavior on a regular basis.  It succeeds when citizens respect the underlying message. The Visual Fence is a simple, but extremely powerful visual concept.  And unlike verbal assertiveness, people employ and respond to some form of the Visual Fence every day. Therefore, the first part of learning and using the Progressive Fence is to become aware of how the Visual Fence is commonly used by people in many aspects of society.

The Visual Fence is a powerful concept because it represents the initial automatic response to a potential confrontation.  It is engaged by body language that conveys of a message of “I am not interested in engaging with you.”

The Visual Fence is widely used because it is a passive response that is universally understood and recognized.  It is generally thought to be a non-confrontational response.  The problem is that most people don’t know what to do when their Visual Fence is violated.  Typically, they simply repeat the same body language over and over.  Passive body language is followed by more passive body language. The problem is that they do not understand that they need a Progressive (escalating) Response to deal with the situation.

Most women and girls know how to ignore the “creepy” guy.  They have learned to use the Visual Fence from experience.

The Verbal Fence consists of assertive verbal phrases such as “Not interested”, “Leave me alone”, “Back off!” These phrases are the natural escalation of the desire to not want to engage with someone. The Verbal Fence is used to communicate in much stronger and more direct terms than the Visual Fence.

Body language is easy to both misunderstand and ignore. Clear use of verbal boundary setting on the other hand leaves little room for misunderstanding. Many people are uncomfortable with the directness of verbal assertiveness. They weaken the Verbal Fence with hedging words such as sort of, kind off, if you will, like, maybe, etc.

The Verbal Fence is most effective when it is combined with the strong body language of the Visual Fence. That means that “I’m not interested!!” is punctuated by a raised open hand, not ended with a submissive smile.

A willful violation of the Verbal Fence leaves no doubt as to the bad intention of the violator. The Rules of Behavior have not been misunderstood. They are not respected. A Progressive Response (higher level) in the form of some type of physical action is required. This action is the next stage of the Progressive Fence.  It is the Physical Fence.

The Physical Fence is any type of bodily movement or action that is designed to limit unwanted behavior.  It is most effective when it also incorporates the body language of the Visual Fence and the assertive voice of the Verbal Fence.

The Physical Fence not only communicates a message. It uses physical actions to enforce the message. These physical actions could be a simple as moving away from someone. It could involve the use of pushing/striking in order to force someone to stop his unwanted behavior. The Physical Fence is a Progressive Response. The force level of this response depends on the context of the situation.

The Physical Fence is used by law enforcement regularly to control and limit behaviors.  It is part of the Use of Force Continuum and represents a wide variety of responses. These responses increase in intensity and severity as the situation becomes more serious.

The Institutional Fence varies drastically upon geographical location. It varies with the time of day. The fence is stronger during the day and weaker at night. It is strong in well policed and traveled areas. It is weak in “fringe areas”. It is weaker still in “bad neighborhoods”. The Institutional Fence exhibits an unseen influence over people. Over the short term, the fence can be ignored or rejected, but ultimately, this fence controls all of our lives. Don’t think so? Try running around the block naked on a hot summer evening. What stops you?

You are walking down the sidewalk, in front of you is a street promoter handing out flyers.

If you are not interested in receiving a flyer, you would engage the Visual Fence. You use body language to communicate you don’t want the flyer (you look away, you look down, you pretend not to see him, you look at your phone). If the promoter ignores your message and approaches, you engage the Verbal Fence by stating “Thank you, but I am not interested.  If he thrusts his arm in front of you blocking your path, you assertively brush it aside with your hand while repeating “Not interested!”.

Your brush off was your Physical Fence. You used the concept of the Progressive Fence to communicate your wish in an escalating manner as the situation warranted. 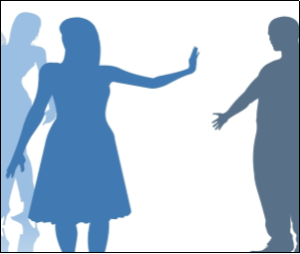 You are waiting at the bus stop. A man attempts to “catch your eye”.

You engage the Visual Fence and confidently occupy yourself with tasks (reading, texting, etc) in order to convey that you are not interested in interacting with him. He approaches you and attempts to start a conversation. You engage the Verbal Fence and state you are “Not interested in conversation.” He ignores your statement and moves closer. You execute the Physical Fence by raising both your arms in front of you with palms forward as you take a single strong step back. You firmly state “I am not interested! Now back off!!”

You actual phrases and actions are not as important as the underlying nature of your escalating responses. In summary, the Progressive Fence consists of:

It is used as a series of escalating responses to limit and control unwanted behavior in interpersonal conflict and confrontations. It is designed to communicate and enforce the Rules of Behavior. It works in part due to underlying respect for Rules of Behavior as set forth by the Institutional Fence.

On using body language to communicate/enforce the Rules of Behavior.
A simple shift in your feet can show as much threat as raising your fist. It all boils down to threat factor.

One night a group of Asshats started shouting at each other one night. I stepped up between the leaders. Looked at both of them shook my head and positioned my feet to take the left one out first . They looked at my feet, then at me, and then sat back down.

If body language is not enough, I usually start with gentlemen or ladies in a firm voice. Go with something like “We are not doing this here!” After that I usually point a finger at the main agitator and tell them Strongly DON’T!  It works on most not all.

I had 3 guys tell me one night that they were going to jump another man in the bar. I asked them which one wanted to go to the hospital first. I am not fucking around. I will put 1 and possibly 2 of you in the hospital in the first 30 seconds. You are the idiots, pick which ones it will be. They got the message.

Occasionally, the next step of physical actions is required.

I step in kick the main agitator in the off leg at his ankle.  All the while shouting STOP. use a heel palm strike to the chin or a bitch slap with cupped hand over his ear. Continue with the shouted verbal command to stop trying to hit me. Any one else involved. Short and fast speed equals innocence. Needs to be over in as few shots as necessary. Elbow thrown defensively, knees used to stun. It varies depending on situation and location.