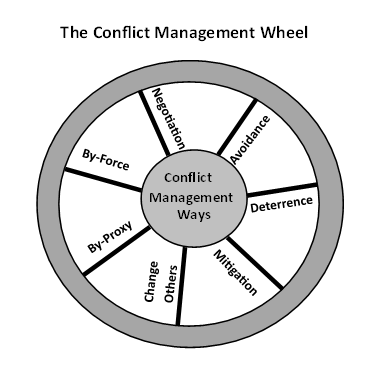 Human life has been and always will be filled interpersonal conflict. These conflicts range from mild disagreements to murder. Conflicts are the natural result of people have opposing interests. When it comes to handling interpersonal conflict, everyone has a “way” (strategy/methodology) of dealing with it. In fact, everyone has their own unique way. These many ways are ultimately derived from seven different primary ways. The following are the seven primary categories. Just like the primary colors, these ways can be combined, blended, and mixed to form compound ways and shades of ways.

The following are brief descriptions that refer to the primary ways that individuals deal with interpersonal conflict.

Negotiation
When many people think of conflict management, they envision some type of verbal negotiation going on. This way of dealing with conflict is based on the idea of using back and forth communication as the main method of coming to a resolution of conflict. A negotiation can also be one sided as in “I will give you the money, but please don’t kill me”. Or it may involve give and take on both sides of the conflict.

Avoidance
Avoiding conflict comes in many forms. Some people avoid conflict in a very passive manner. They “turn the other cheek”. They acquiesce as a rule rather than risk creating a future conflict. Another type of avoidance is more proactive. You see a dangerous conflict in the making and you avoid it. Actively evading and escaping from a conflict is also a method of avoidance. Regardless of whether you escaping a kidnapping or are evading a warzone, you are still avoiding conflict.

Deterrence
The overall concept of deterrence is to create a disincentive for conflict. Deterrence is designed to reduce someone else’s desire to engage in conflict. Proactive deterrence involves actions that discourage someone from engaging in a conflict with you.
On example is purposely appearing to be “tough”. In this case, you are making it known that you are “too dangerous” to mess with. Visibly carrying a weapon is also another example of deterrence.

By-Force
The use of force to resolve conflicts is usually considered to be the way last resort. By the time the use of force is necessary, the other ways are likely to be or have been ineffective. When individuals use personal force, there are two categories. Either use a tool (a weapon) or not (empty handed). In either case, the conflict is resolved, when one party literally forces a resolution upon the other.

By-Proxy
Everyone, except for a few hardcore isolationists, manage some conflicts By-Proxy. The most obvious example of this way is depending upon the police to resolve disputes and maintain order. Another way is getting bystanders/friends/family involved to manage a conflict for and/or with you. Use of conflict management By-Proxy is an inescapable part of life modern society. But there are those that take By-Proxy to the extreme and depend upon others to resolve any and all of their problems.

Change Others
A roundabout way to deal with conflict is by changing how others behave in relation to you. In this case, conflicts are resolved because others no longer have desires that conflict with yours. If it “takes two to tango”, by removing the conflicting other party from the equation, a conflict is prevented.
For example, the goal of some people is to change how others relate to them by changing the norms and culture of society. They see other people as the main source of conflicts. Therefore, their aim is to change how other people behave in order to prevent conflicts.

Mitigation
Mitigating the aftermath of a conflict is an often neglected way of managing conflict. The goal is to minimize the negative consequences of the conflict. While it is usually more desirable to have dealt successful with a conflict using one or more of the other six ways, that is not always the case.
People who take active steps to deal with the physical and/or emotional trauma of a previous conflict are engaging in the way of mitigation. For example, providing yourself with first aid is a form of mitigation.

As with the primary colors, none of the seven ways is inherently better or worse than the others. Is blue a better color than red? It all depends on how the ways are used and to what degree. Each of the ways has its own particular advantages and disadvantages. All the ways have associated costs and benefits. All ways are subjected to being taken too excess or too minimally.

Problems arise when people use one way when another way would be more effective. Or if they use an extreme version of a way. Or if they try to use one way to solve all of their varied conflicts. Incorrect use of the ways may turn conflict management into conflict mis-management.