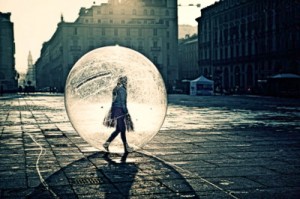 An idea I’ve been working on is what I’m calling the ‘isolation bubble.’ As in people going through modern life as if they are in a mental/emotional/ physical force field that keeps everything at bay and they don’t have to interact with others. This is endemic. It has — in fact — become a new form of social etiquette. (How do you behave in a crowded elevator surrounded with strangers?) One can argue isolation has become the modern version of being polite.

When this bubble is breached many people … well get offended is one way of saying it. But another is when people are ‘forced to have to interact with others’ many consider it an imposition. They use the fastest social script possible to end the situation.

The problem is how many people have decided that ‘this’ is all they have to do. That nothing else ‘should’ be required of them. Part of my ‘fuck victimology’ attitude just clarified in a conversation with Rory Miller. Basically it’s the different mindset of pre vs. post technology. And the idea can be understood in the lowly thermostat.

For millions of years of human existence we had to adapt to things we couldn’t change. Cold? Put on a sweater. Why? Because we only have so much wood chopped and stored and we needed it for when the hard freeze showed up. Comfort was way down the list when issues like survival and long term sustainability were priority.

Now, with modern technology all you have to do is turn up the thermostat. You don’t have to adapt (change your behavior) you change your environment to fit your comfort zone. Since survival is not an issue and if your utilities are paid for — fuck it, comfort gets priority.

Now there’s a huge tangent about people fighting over who ‘should’ control the thermostat, but that’s another issue. I’m seeing an increase in the attitude that people ‘shouldn’t have to’ step outside their comfort zone. (This in tandem with the belief that the entire world operates with some kind of mythical thermostat that they can control).

The key point here is the belief that all you should have to do to stay in your comfort zone is minimal effort (nudge the thermostat).