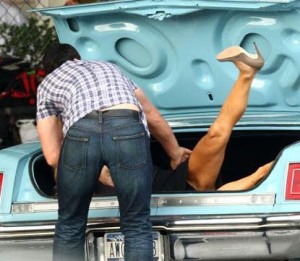 The question of whether someone should comply with a demand to go to a second location or try to escape when threatened by a Predator with a weapon is quite common. The scenario is usually some version of the following:

You are approached by Predator with a weapon who is a stranger (NOTE: If the Predator is known to you, then there are different dynamics at work) and ordered to move to a second location. The second location is any location that the Predator wants you to go where he has more control and privacy. That location could be into an ally, behind a bush, into a car, into a room, etc. Should you comply or should you try to escape?

This question can be examined using a Cost/Benefit Analysis.

Given that this is a difficult analysis to make given the many individual factors and variables involved, the following is a line of thinking to consider:

In the vast majority of incidents involving a Predator (Resource or Process), the Target is not killed for trying to escape. This is a statistical fact and can easily be verified. One reason for this fact is that the Predator has little to gain and more to lose by killing the Target for trying to escape. The Predator is responding to his or her own Cost/Benefit Analysis. Most Predators are not motivated enough to kill you for only non-compliance in the form of trying to escape. Please note that deliberately goading or challenging a Predator with a weapon is a much different story and is likely to get you killed.

On the other hand, there is a much less common, but ruthless type of Predator that doesn’t follow the standard Cost/Benefit Analysis and is willing to try to kill you for trying to escape. In part, because your life is meaningless to him or her.

It makes sense to try to escape from a Predator who is NOT willing to kill you for trying to escape, since you should be able to escape without being killed. His or her weapon is part of the Predator’s Threat Display and is not intended for use. This situation is the most common scenario.

That leaves the question of “should you try to escape from someone who IS willing to kill you for trying to escape?”

My response to that question is as follows:

If a Predator is willing to kill a perfect stranger for doing nothing other than trying to escape a threat to his or her life, is that the type of person you think is willing to let you go unharmed if you go to a second location with him or her? Is that a “trustworthy” person who will not harm you in exchange for your compliance? Or is this person someone who has such little consideration for your life that he or she is more likely to torture and kill you at a second location?

To put it another way:

If ALL Targets complied with ALL threats by ALL Predators to go to second locations, then MOST Targets will have complied to something unwanted (robbery, sexual assault, or something else) when they could have escaped (Predator is not willing to kill to stop them from escaping), AND some of them will have complied with a Predator that is willing kill them and might want to torture/kill them.

On the other hand, if NO Targets comply with ALL threats by ALL Predators to go to second locations, then MOST of the Targets will have escaped without having complied to something unwanted, AND some of them will have tried and succeeded to escape from a Predator that was willing to kill them and might have wanted to torture them. AND some others will have failed to escape and suffered injury or death.

It is important to note that compliance in the form of going to a second location is fundamentally different than compliance in the form of giving up your valuables or possessions. If a Predator only wants your resources, then you are not important to him or her. Therefore, you don’t need to go to that second location, only your resources need to go there. In such a case, you separate from the demanded valuables, and you send them along with the Predator (you give up your wallet, purse, car, etc).

If a Predator wants YOU to go to that second location, then YOU are the resource. When faced with a Predator that both sees you as a resource and is willing to kill you, then you DO NOT want to go with that person to a place of his or her choosing.

In other words, a Predator who IS willing to kill you is NOT someone you can trust to NOT hurt/kill you even if you comply with his or her demands.