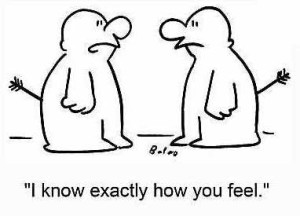 I said this about a specific topic, but it applies to a great many ‘social justice’ types who try to manipulate you by invoking empathy.

***
My concern is this approach is teaching people not to care.

Many years ago I knew a drunk named “Buddy.” Buddy’s only claim to fame was that he’d been beaten up in all 50 states. That’s because when he drank, he got both mean and argumentative. Thing was he’d go on until you grabbed him and then he’d go limp and silent. This is a sign of submission and people would let him go.

Then, like a jack-in-the-box from hell, Buddy would pop right back up and start talking shit again. When grabbed, he’d again go limp, but by that time it was too late. People beat the shit out of him.

My primary concern over Buddy’s behavior is that he was teaching people not to trust submission signals. It wasn’t what happened to Buddy that bothered me, but that the puncher wouldn’t believe legitimate submission displays in his next encounter. As such, he’d be more prone to beat the shit out of someone who was legitimately trying to back away. He’d been burned this way before so why believe it? Why trust it and risk getting burned again?

The parallel I see here is the overuse and abuse of empathy that we have for each other to manipulate and gain control over others. This especially now with the idea that the earmark for being civilized is egalitarianism and being empathetic to the plight of others. Yes, there are bad things in the world. Thank you for pointing that out to us. But you’re demanding we make untested change to fix it. If the demands don’t work you run to authorities to enforce it though policy and law.

But the strategy of invoking empathy first so nobody questions the bullshit you’re shoving down people’s throats works only so long. As in it doesn’t cover the taste of bullshit and eventually people stop being willing to swallow it (especially because how often it makes them sick).

My primary concern over this tactic is that is so commonly used that way too many people are simply not giving a shit anymore. And why should they? So many of these social justice movements use them. Manipulating empathy is an effective short term strategy — if the person cares and most importantly self-identifies him or herself as a caring person. But eventually, between the taste and the effects of having so much bullshit shoved down your throat, people give up on giving a fuck. They say to hell with it, quit listening and go their own way.

The problems inherent in this ‘scattering’ are way beyond anything I can communicate in this media. But it follows some particularly nasty and predictable patterns.