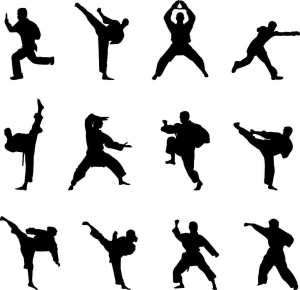 I just had someone ask about that tired old “traditional martial arts don’t work against the MMA/grappler ‘shoot’ (a lower leg tackle)” argument.

First let’s make sure we’re using the same meanings of words. I have a friend who breaks down Japanese martial arts in three tiers:
Commercialized
Traditional
Classic

Classic is pre-WWII stuff — when it wasn’t mass taught. Traditional is what happened when Kano got Judo introduced into the school system and Funikoshi was teaching it at the Universities and to military in WWII — in other words mass teaching. Commercialized is what happened with MA schools and Westernization.

Kelly Worden is the guy who coined the term “Kiddy Karate” to describe the changes in school taught karate (not just dojos, but PE in school). In traditional karate lot of stuff was changed, dropped and ‘softened’ to prevent injuries among the students (and by that I definitely mean kids). This was the beginning of what I call a car with no engine. But at the time it was taking out the carburetors and coils. Stuff that could be easily added in later.

Commercialized is what came later and when teaching MA became not just a business, but a career. This is the whole engine is missing stuff. It’s also gotten a lot of crap added to it as someone either tried to jury rig the moves to make ’em work again, or just ripped off and added shit wholesale to meet market demands. (Like Yudo. The secret Korean wrestling system that was ‘rediscovered’ and added to Tae Kwan Do schools’ curriculum when the whole BJJ craze was hot. Oddly enough, it looked exactly like BJJ — and if you walked into the Sabunim’s office you could often find “Learn BJJ” DVD courses on the bookshelf.)

All of that is background to explain why what you’re asking isn’t as simple of a question as you think it is.

I know of a technique — a technique that you can see versions of in all three forms — that depending on which version works, might work or is a fuckin’ disaster against a shoot.

The hand work is the same in all three. One hand goes palm up to the shoulder. One hand goes palm down to the thigh. In commercialized karate, the person just stands there. In traditional karate he drops back into a cat stance. The cat stance not only changes range, but puts all the weight onto one leg.

In classical … well that takes some explaining. From a forward facing position, he shifts to the side (left)while turning 90 degrees. (So he’s facing what was his right.) Here too is a cat stance. Inherent in this cat stance, however, is a weight drop onto that one leg.

Facing a charging opponent, the commercial version is going to get tackled. In the traditional one, if the shooter isn’t committed the change in range might work — and the hands might keep the guy from getting a grip. Against a committed charge however, the traditionalist is going down. That’s because he didn’t get off line of the shoot.

In the classic, the shift to the side gets the person off line. That stupid seeming hand work (seriously I could never figure it out and all the explanations for it from commercial and traditional folks made no sense)being to make all kinds of sense from this sideline position. The upward moving hand catches one of the attackers arms and lifts. The downward moving hand shoves his head and neck down. The combined action creates a rotation in the grappler’s body, that flips his — what I call longhorn rush — from horizontal to vertical.

This last is very easy to see why it works. Stand up, lean forward and hold your arms out with your palms facing the floor. That’s the longhorn (hook ’em horns). Longhorn rushes are a bitch to deal with. That’s because just moving to the side, still gets you hooked by one of the horns.

Now, without moving your arms, twist your body so both palms are facing a wall. That’s the rotation from horizontal to vertical the classic technique creates. Mix it in with not being directly in front of the grappler and more and the shoot is ruined. The grappler literally goes sailing by. The weight drop changes the level of the karatedoka, if not to that of the grappler, close enough that the leverage the grappler was relying on isn’t there anymore. Also, the weight on the back foot allows for fast movement into the next action — especially forward movement or attacks with the leg.

I’ve seen this classical technique done against someone trying to shoot the leg. It is …a thing of beauty despite its purpose. I’ve also seen people try traditional and commercialized versions and get creamed. Here’s the bitch, ALL of them are convinced they’re doing the technique right. And while we’re at it, these three variations are the basis of MMAer’s saying that martial arts don’t work in the street. And hey, given that odds are they’ve only seen watered down traditional and commercialized stuff THAT observation is true — as far as they’ve seen.

So the point is NOT whether martial arts don’t work or MMAers are better. In fact from a technique standpoint, most MMAers are technically worse than most martial artists. (They compensate for shitty technique by being in such good shape.)

What it’s really about is mechanics.

Does the person doing the move have the mechanics that make it work?

Or are they patching it with muscle? And that opens up a whole new can of worms. All kinds of shitty techniques work on someone you’re stronger than. But those same shitty techniques fall apart facing someone who is stronger than you. So if you limit yourself to only fighting eight year olds your MMA is guaranteed to work out in the street.

The other issue — which I’m not going to go into — is there are all kinds of really nasty counters to a grappler trying to throw a shoot on you. Except, they aren’t friendly fight techniques and they’re some of the fastest ways I know to get thrown into prison for excessive force. Because remember, MMA techniques are not self-defense, they are fighting. And fighting is illegal. So if you’re in a fight and you pull one of these moves, you were already in the wrong. Now that he’s seriously injured…