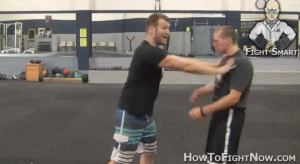 First off, I disagree with the guy’s starting premise of teaching you how to ‘win a fight.’ A fight is mutual battery. Putting it another way, self-defense is you have no choice, a fight is you’re part of the problem. A use of force incident is you’re using force to end a situation. The three things are RADICALLY different. But more, the variations are more complicated than can be learned in a simplistic video

Second, BAD plan touching the dude. Agree with the stepping away part. There’s a good chance it will light him up — especially because you’re stepping away. You’ve disrespected him.Bad witness grooming. Yes it’s a conditional threat, but it’s also a violation of Peyton Quinns rules1) Don’t insult him2) Don’t threaten him3) Don’t challenge him4) Don’t deny it’s happening5) Give him a face saving exit(I’ll let you work out which one, or — if you’re thinking — which two it violates)And the guy is completely wrong that threatening to hit the dude will let everyone know it’s a ‘self-defense situation’ The first thing most people will ‘hear’ is you threatening to hit the dude –Wah wah wah I will hit you wah wah.Then he proceeds to say the best ‘self-defense strategy’ is the least effective, sports fighting technique. And yes, I am talking about punching … oooooh then he uses a knee. So he says ‘defend yourself by beating the hell out of the guy’Here’s a few problems with using sports techniques in self-defense situations1) Sports fighting mimics actual fighting. Fighting = you’re part of the problem. THAT’S what people are going to ‘see’2) Sports techniques are intentionally designed to be ineffective fora) the safety of the participantsb) to extend the match for the entertainment of the crowdSo yeah, you can pound the hell out of each other and NOT get injured. This no matter how fast or hard you go. However, where injury usually happens is when the person falls and hits his head. In the padded ring, not so much a problem. But outside of that? What shows up on the security feed is you beating the hell out of the guy and –like every other douchebag who thumped someone — claiming ‘self-defense’

Here are a few videos that show the fall and head injury Marc MacYoung refers to: