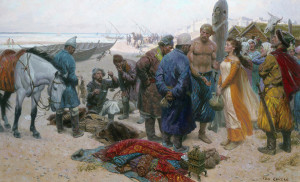 I tell people violence is always on the table – especially in negotiation. Thing is it’s a weird table. It’s curved like a globe. As long as everyone chooses to stay ‘over here’ violence is over the horizon and really isn’t an appropriate solution.

However, if someone isn’t willing to compromise, violence appears on the horizon. The more adamant and more insistent someone becomes about having their way, the closer violence gets.

Not because violence is approaching, but because people are moving towards it (think of driving and seeing your destination coming into view). Thing is often people don’t realize they’re driving towards violence. Often they are so myopically focused on ‘winning’ (which isn’t even a negotiation) they don’t see what they’re doing or that shit can go way, way beyond what they’re ready for.

If everyone agrees to negotiate then violence is never an issue. Still other folks — especially when they are yelling and screaming — recognize violence is on the horizon and turn around and head back to safety.

But a lot of folks think it’s okay not to negotiate because you’d never dare to touch them… even if they have no hesitation about physically attacking you. With this myopia, they run full bore into violence. At first this is somewhat innocent, but after a while, a good chunk of these people learn that violence works to get what they want and have no problem running there straight away. They use the threat of violence to get what they want all the time. Thing is while it’s mostly a bluff, it’s relying on other people not meeting them with the same level of force. They’re used to running over people. But when you knock them on their asses, then you’re the bad guy.

That’s why it’s important to know the horizon analogy and to keep your ducks in a row in case you have to go violent.