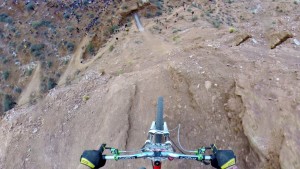 “Right before performing the  backflip, he rides his bike high on a narrow mountain ridge, a fall to either the left or right would be disastrous”.

We all know this. So why then is this principle of balance and timing so difficult to understand when it comes to Enforcement? Enforcement of the Rule of Law is what separates civilization from chaos and mayhem.

What happened when the British Over-enforced the Colonies with high taxes?
A backlash in the form of the Revolutionary war.

What happened when women were not allowed to vote?
A backlash in the form of the women’s Suffrage movement.

What happened Nazi Germany invaded Poland?
Contempt for peace that led to further invasions and ultimately to WWII.

What happened when Wall Street was left alone to do as it wished?
Contempt for financial regulations and safeguards that led to the most recent financial crises.

Enforcement only works to create Respect when done properly. Enforcement done wrong leads to less Respect. We all know this. Yet, few of us are able to practice successful Enforcement. Unlike other skills, the application of Enforcement is rarely taught as balance and timing dependent.

Despite the fact that some outsiders and the local Police may view the policing actions as appropriate, as long as many of the citizens do not, Respect will continue to erode. Only when there is a consensus on what both sides believe to be appropriate Enforcement AND only when this Enforcement is implemented will trust start to be created.

The problem of college based sexual assault is a cluster of inappropriate Enforcement originating from school administrations, campus police, anti-violence activists, victims, bystanders, and the college community itself. All of the cross-currents of Over-enforcement and Under-enforcement create back and forth contempt and backlashes. What is not created is Respect. Thus, the problem continues unabated despite increased “awareness” of the issue.

In this case, many of the involved parties’ viewpoints are so colored by ideological bias or self-interest that they are unwilling to see how their own actions of inappropriate Enforcement are actually contributing to the problem. Establishing Respect and the Rule of Law requires wide spread agreement on what actually constitutes Just-Right Enforcement and just punishment. The more disagreement and division created, the less likely “appropriateness” will be resolved.

Many conflicts that revolve around the issues of religion, race, sexual orientation, firearms, and gender are rife with activists that use mass stereotyping and bias as a means to raise awareness and generate support for their causes. These activists call for Enforcement without regard for the need for appropriate Enforcement. They don’t see the importance of balance and timing. They don’t understand their opponent’s point of view.

These activists are analogous to enthusiastic novices engaging in an activity that requires high skill and experience. They don’t realize how their ultimate success is directly tied to their ability to utilize balance and timing. They think that the harder that they push and yell, the better the outcome will be. The inevitable result is that they fail to solve the problem, and in many cases, they only serve to make it worse.

Extreme Athletes solve physical problems with the force controlled with balance and timing. Individuals and Society should follow their example and strive to do the same.