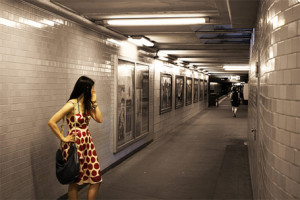 ***
Here’s the thing, DON’T confront these guys unless you’re ready to rock and roll.

A lot of street rats and skells do indeed do something weird and attention grabbing to test your reaction. They also get verbally offensive and try to turn it around onto you when called on their behavior. (“I’m not following you, bitch/Why you being so unfriendly?”). Either is acceptable AS long as they’re leaving. That’s what happened in this case.
It’s when they do that behavior and continue to advance that it can become a problem. Now the question is… and it’s a damned big question … is it because he was planning to attack all along or did the person provoke it?
Recognize that this is an ‘interview.’

Learn about the Five Stages of Violent Crime

Don’t know what it was for — specifically. And in truth, it doesn’t matter. All kinds of bad things are down that way. Basically nothing good can come from going down that road, so don’t wait to find out what he’s up to. Get off the road ASAP.

Confronting the guy might end the interview right there (as it did in this case) or the guy may try to bump it up. (“I’m not following you, bitch!” WHILE advancing.”) Through both he’s looking for signs that say it’s safe to continue with his plans. Call the intentional following and noise making the first phase of an interview. Call the outright aggressing (but out of range) phase two. If just turning around, confronting him with “Why you following me” works, fine. End of situation and “YAY!”

If he bumps it to the second phase, it’s not the end of the world — but it is why you don’t confront without the willingness to rock and roll. It’s scary, but recognize that he’s advancing, not attacking. He still has time to abort if her reaction ‘fails’ the interview. She is the one who is going to have to do something to ‘fail the interview.’ And given the escalation, this fail has to come P.D.Q..

I think I mentioned the paradox of ‘the willingness to commit violence usually means you don’t have to.’
‘Trouble’ reads your willingness and the conditional threat (If you continue with A, then 1 will happen) and breaks off the plans. This is conditional on you NOT insulting/challenging/threatening or personalizing it.

The Best Way to Get Attacked

For many people — especially ‘normal people’ –this is hard because emotions and insults are their primary weapons. And while they believe their use of these is ‘protecting themselves’ they’re actually attacking (or as a friend of mine dubbed it ‘self-offense’). Insults, etc., create a ‘loss of face’ that often provoke the ‘honor-culture’ nature of street people and the violent. This to the point the person feels he HAS to attack (In essence the attacker now feels he’s the victim and has to regain lost honor and face).

That’s why you don’t become verbally abusive when confronting street rats and the violent (no matter how scared or mad you are).

Having said that, some violent individuals will view any calling them on their behavior as a challenge. (See the get attacked link.) YOU are insulting them for not allowing them to pee on your building (I wish I was making this up).If the guy was planning to attack, all he does is change his ‘interview’ style to hot. (see five stages link). Instead of backing off, they escalate.
Ya kinda gotta be ready for that.

Which brings us back don’t confront if you’re not ready to rock and roll. If she had pepperspray, or a stun gun, or something then the time to access it would have been before confronting (if loverboy chose the escalation route she wouldn’t have time to access it). Except for specialized circumstances it’s not part of the initial “Why you following me?” strategy, but a lot of idiots who use hot interview techniques, (or who flash into fury about being called on their behavior) are quick to attack. They’ve learned that people who’ve been trained to ‘use their words’ are easily overcome by hot interviews and blitz attacks.

The willingness to use force is… well, Sir Basil Liddell Hart said it best:
“It is folly to imagine that the aggressive types, whether individuals or nations, can be bought off … since the payment of danegeld stimulates a demand for more danegeld. But they can be curbed. Their very belief in force makes them more susceptible to the deterrent effect of a formidable opposing force.”

Like everything else this is a little more complex than just ‘be willing to use…’ but she might want to consider having something up her sleeve than just words and social conventions if she’s going to be riding the L.