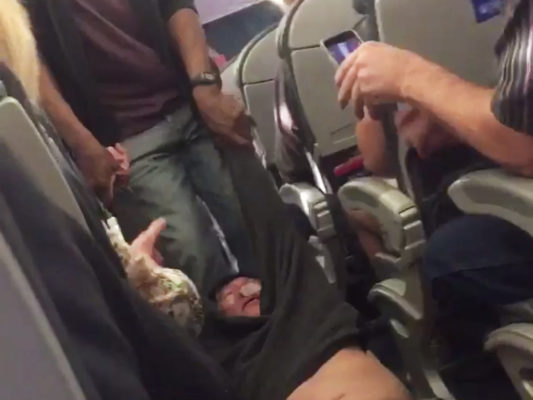 A screenshot of video showing a passenger forcibly removed from a United Airlines flight from Chicago to Louisville, Ky., on Sunday. Video and story here.

The recent incident of a passenger being forcibly removed from an airplane has created a firestorm of traditional and social media commentary. There has been lots of talk of passenger rights, laws, contracts, corporate profits, corporate responsibility, the use of force continuum, and more.

Boundary setting is a tool of conflict management. But when it is used ineffectively, conflicts tend to spiral out of control which is the hallmark of conflict mis-management.

The main parties involved in this incident are:

I will briefly deconstruct the incident in terms of boundary setting to examine what happened.

1. The Airline Crew feels that the Passenger is violating the rules of behavior by not vacating his seat as requested.

2. The Passenger feels that the Airline Crew is violating the rules of behavior by requesting that he vacate his seat.

Problem #1: Lack of Clear Communication – The rules of behavior a set forth by the ticket contract have not been clearly communicated by United Airlines.

As a result of this lack of communication, both parties feel they are in the “right”.

3. Airline Crew enforces their perception of the violation of the rules by engaging security to enforce the rules.

4. The Passenger enforces his perception of the violation of the rules by not leaving his seat as requested.

Problem #2: Over-enforcement by the Airline Crew. Given that the conflict was a civil contract issue, I think enforcement should have be done with civil proceedings an opposed to criminal proceedings. If the Passenger is in violation of the rules, he should face civil consequences.

For example, the Airline Crew could have kept offering more money until someone willing gave up a seat. Next, United Airlines could later sue the Passenger for damages from breach of contract.

6. Passenger refuses and uses force to attempt to remain in his seat.

Problem #3: Over-enforcement by Passenger – The Passenger is now using physical force against Airport Security to enforce what he believes to be his “right” to remain in his seat. His use of force changes the character of the conflict from a civil contract dispute to potentially criminally disobeying a lawful order from the police. Over-enforcement creates a backlash. Physical Over-enforcement tends to create a physical backlash when used against security and/or the police.

Problem #4: Over-enforcement by Airport Security – At this point, Airline Security could have recognized that this conflict was inherently a civil dispute. Thus, not an Airport Security matter. Or they could have clearly communicated to the Passenger that refusing a lawful command from Airport Security is a separate issue regardless of whether or not the Passenger had the contractual “right” to remain in his seat. Once the rules of behavior were clearly communicated, they could then use force as mandated by their procedures.

8. Some of the other passengers are horrified by Airport Security’s use of force and express it verbally. Some engage in video recording as a method of communicating to the Public about the incident. By doing so, they are engaging in indirect bystander intervention.

Over-enforcement is in the eyes of the beholders. It is not an absolute level of enforcement. Therefore, if the other passengers perceive it to be Over-enforcement, it will likely create a backlash regardless of whether it is “justified” or not.

9. Some of the Other Passengers post their videos on social media.

Problem #5 – The Public Jumps to Conclusions. The Public is outraged by what they see as Over-enforcement of the rules of behavior. The Public draws conclusions, responds emotionally, and doesn’t carefully examine the facts involved before becoming outraged and condemning the actions of Airport Security, the Airline Crew, and United Airlines.

Problem #6 – United Airlines engages in Under-communication (unclear communication) about the incident which creates more Lack of Respect in terms of spawning an even greater backlash.

10. The final result is a massive loss of trust (and possibly revenue) in United Airlines by the Public. The Passenger sustained physical injuries and will likely sue for considerable damages. One of the Airport Security officers was suspended. Some of the Other Passengers were traumatized by the incident. All passengers were delayed.

Once this conflict is deconstructed, it should be obvious that the root cause of this incident was a lack of clear communication on multiple levels by United Airlines which lead to spiraling actions of Over-enforcement and the resulting backlashes. Contributing factors also were the responses of the Airplane Crew, Airport Security, and the Passenger.

A Lack of Respect is created by conflict mis-management. Conflict mis-management comes from ineffective boundary setting. Ineffective boundary setting is created by a backlash. A backlash is the natural result of the perception of Over-enforcement. The perception of Over-enforcement is the natural result of Under-Communication of the rules of behavior. Therefore, it is inevitable that unclear communication will lead to Lack of Respect on a systemic basis.

This type of incident should have been foreseeable to anyone who understands the basics of boundary setting. The fact that it wasn’t, illustrates how much education on conflict management is still needed in society.