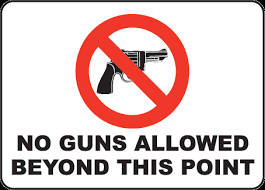 I was asked by a concealed carrier what his self-defense options are in businesses and locations that prohibit firearms (which as property owners IS their right). It’s a simple question, but not a simple answer….
****

Okay, you’re asking a very important question. But you’re approaching it from a direction that, while it seems to make sense, is kind of limited. It’s a lot bigger and more complicated of a subject.
If you only have a hammer, you tend to see every problem as a nail ~ Abraham Maslow
That quote — in a nutshell — sums up the problem of only having a lethal force response. I tell people that self-defense is a square on the floor. You have to stay INSIDE those lines.

Two, the hardest thing about using lethal force is that when it is legally allowed someone is trying to kill you. Believe me when I tell you this complicates things. If the person isn’t in the process of attacking you can’t claim self-defense. Well you can, but you’ll be convicted.

Three is an ugly hybrid. You are legally required to use the minimum force necessary to stop a threat. That is to say without specific circumstances you can’t shoot someone for just punching you. This is a critical problem with ONLY having lethal force options. You are further required to stop when the threat stops. (Otherwise you end up being Jerome Ersland walking back and executing a downed and helpless kid — and like Ersland convicted). Four, you CANNOT be a participant in the creation and escalation of an event. That’s fighting. Self-defense is legal, fighting is illegal. (This is why your actions before the incident will be gone over with a microscope to see if you were part of the problem.)

Now those four lines remain no matter what level of force. And levels of force are a REALLY important idea. Let’s say that square on the floor is pushing away someone who’s getting to close and threatening you. Except, now imagine putting a dinner table inside that square. That’s a higher level of force. (Let’s say you really have to hit the guy hard to get him to back off). The restrictions on when you are allowed to do that are stricter (the table is smaller than the original square). If you have an item — especially a so-called self-defense item – in your hand, that’s a smaller coffee table put on top of the first table. Now if you use lethal force, that’s a folding chair you’re standing on … on top of the coffee table… on top of the dinner table… inside the square.

And you damned well better believe a prosecutor (who influences the cops arresting someone) is going to both try to knock you off that chair and/or cut the legs out from those tables. He’s trying to sell the jury the idea that you weren’t inside the SD square. Now I’m going to tell you the bad news. While it is ‘technically’ wrong, you need to understand this…

“When you claim self-defense, you are confessing to a crime.”

Ordinarily half of the prosecutor’s job is proving that the accused did it. (The most common criminal defense is SODDI -Some Other Dude Did It). You just did that job for him. You just admitted to shooting, stabbing or clubbing the guy — but you’re claiming that you had good reason.

As an aside and in the name of accuracy — and because lawyers nag me if I don’t say it — when you claim self-defense you are confessing to the elements of a crime. So you’re not confessing to a crime, but the elements. Got that? (But know the prosecutor is going to be treating it like a crime.) Gee, lawyers splitting hairs, what a surprise.

This brings us to another idea that is technically wrong, but easier for laypeople to understand…
“When you claim self-defense, the burden of proof shifts to you”

Actually it’s production of evidence; but unless you’re a lawyer what the hell does that mean? It means you are responsible to provide evidence that it was self-defense. That’s a whole lot more than just saying “I wuz defendin’ mahself.”

I can tell you one of the things that trips people up. In law, words have specific meaning AND they don’t mean them how you use them or think about them. For example, you think “I was justified in defending myself.” Simple right?
Except look at this definition form the ‘Lectric Law Library. Justification: The act by which a party accused shows and maintains a good and legal reason in court, why he did the thing he is called upon to answer.
“Lucy, you have some ‘splainin’ to do.”

If you can’t explain and provide evidence about what the guy was doing and why you sincerely believed it was self-defense then the prosecutor is going to eat you alive — especially if lethal force was involved. Being justified is more than just in your mind, it’s being able to explain to other why what you did was out of self-preservation and not a crime.

I tell you all of that so you can understand this:
You asked about self-defense options going into a ‘No guns allowed’ business. But that’s NOT the problem. The problem is everyday walking around with ONLY a lethal force option. That’s a huge danger you are in every day and you don’t even know it.

Of all use-of-force-levels, lethal is both the rarest AND most frowned upon. Yet is the one that the shooting world jumps to and prepares for. They start at lethal force without understanding anything below, much less the square. By only having a firearm (or knife) and no other options, you have climbed up on that chair, on top of those tables. What are you going to do if the situation doesn’t require lethal force? I know of an incident where a woman pulled her pistol on a crazy guy who wanted to talk to her about the Jesus connection with the martians. You can’t pull a gun just because a crazy person wants to talk to you. If I did that I’d never get through a family Christmas.

Now that’s a joke I make, but being charged with brandishing/felony menacing/whatever they call it in your state, isn’t. And that is exactly what she’d done. She had no other use-of-force option than lethal. So even though she hadn’t pulled the trigger, she’d climbed up there and then jumped off the coffee table. That wasn’t ‘self-defense’ anymore because she’d crossed the excessive line.
Why did she do that? Hint, hammer, nails, looks like…

You need to have other use of force options ALL THE TIME! So if you walk into a situation and it says no guns you’ve got multiple options. One you choose to take your business elsewhere. (That’s what I do.) Or you can choose to carry anyway. (Not that I recommend that, but you’re a grown up and responsible for your choices.) Or you choose to comply. That’s fine, you shrug and shift gears to either less-than-lethal options or things that aren’t projectiles.
It is your familiarity with using these options — especially when to use them instead of a gun — that is doing the work. Not any particular item that you choose. Everything works in certain situations, everything fails in others. The answer is in having a full tool box (to handle different jobs) instead of just a hammer.

For example, how familiar are you with using different weapons? Because I know how to use sword, staff and flexible weapons — unless I’m standing naked in an empty parking lot — I’m next to an improvised weapon. Anywhere. If I can reach it I can use it. (Including the time a guy threw a cat at me… lemme tell ya, that sucked.) Me with a knife — which I routinely carry as a tool — yeah that’s not going to work out too well for someone. I don’t need the 21 Foot rule because most people — even with guns — close the distance themselves.

Empty handed? Three goals of empty hand, 1)escape, 2) control and 3)disable. Do you know how to do any of these? I ask because they’re WAY more useful than a gun when the problem you are facing is a quarrelsome drunk or someone who wants to fight you. (Notice I didn’t put fighting in the list of three.) Knocking someone down and running like hell is well within the SD square. Fighting isn’t. What’s your escape route? Anytime you walk into a building you need to be looking for all the ways to get out. Even if you have a gun, someone comes in shooting in that door, you go out the other. But especially if you’ve disarmed.

I wrote this some time back, but it’s things to think about. Unlike many people who are telling you what to do when someone is shooting, I’ve actually been in those situations

I know this probably isn’t the answer that you were hoping for, but the fact is there are lots of options. Options that are however based on the circumstances you find yourself in. There is no one ‘you just do this answer,’ but that’s what people seem to want. On the other hand, once you are familiar with these different levels you’ll be better equipped to have a full tool box instead of just a hammer. A hammer that’ll put you into prison if you use it when you shouldn’t.

I know this probably isn’t the answer that you were hoping for, but the fact is there are lots of options. Options that are however based on the circumstances you find yourself in. There is no one ‘you just do this answer,’ but that’s what people seem to want. On the other hand, once you are familiar with these different levels you’ll be better equipped to have a full tool box instead of just a hammer. A hammer that’ll put you into prison if you use it when you shouldn’t.