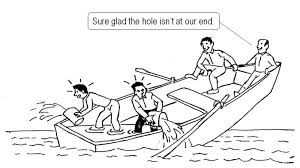 I think one of the biggest issues I have with people who come from the “I’ve never needed a gun, so neither should you” approach is how I grew up.

Although my family was originally ‘middle class,’ we were reduced to situational poverty. As such, I grew up surrounded by people from two different anthropological models, (they don’t cancel each other, they instead layer) — specifically honor cultures and sociocentric societies.

These are wildly different mindsets than what arises from dignity culture and individualistic oriented societies. (Ideals STRONGLY embraced by the White American middle class and academia.) The difference is, I’m not exclusive to either. I have a foot in both worlds. Not only from having dealt with both, but how they’ve influenced my outlook on life.

One of the biggest differences is that in dignity culture your status, dignity, value and rights are assumed. This ideology comes from the premise that you are born with human rights and nobody (not even yourself) can take those away. It is strongly rooted in Humanism.

Now mind you I’m not badmouthing this core idea. It gave us some great things, including the advancement of Western Civilization, democracy, freedom from theocracy and the end of slavery. So YAY! dignity culture. However anything can be twisted. Which we’ll get back to.

Honor cultures come in two basic forms: Guilt/Shame. Way different, and different results. Here’s a key difference between them and dignity cultures, status, dignity, value and rights are NOT assumed. They can be taken away, lost or degraded by others –and most of all yourself.

Guilt honor cultures basically don’t do stuff because they ascribe to a code and often ascribe a super-being watching them. To do certain things would dishonor them and cause guilt. (And yeah, that’s a biggie between religious and secular thinking.) Thing about guilt honor cultures is unless you’re part of it, they really don’t care about you. As in — for the most part — they’re busy with their own stuff and meeting their own standards. If you’re not in the group, you kinda have to poke ’em to get them riled at you.

Shame honor cultures however, can be a big problem. Starting with that taken to an extreme they can’t be shamed, but they’ll kill you if you humiliate them. Often there are strict rules of behavior and standards, which — hey, if nobody knows about it – they’ll violate these in a heartbeat. These cultures are very seldom WIZZTWIG (what you see is what you get), in fact a lot of the time they can be downright snakey. Or ‘the rules’ only apply to those of their ‘tribe,’ anyone else is not really human and therefore, fair game.

For the record these folks are very techy about their honor and how they are treated, often to the point of violence. It is incumbent on them to protect their reputation and status. A particular pernicious version of this is when it’s translated into someone’s right to misbehave. You know what is a really good way for them to get away with this attitude? Violence.

If you ‘call them’ on their behavior, their first instinct is to consider violence and/or intimidation. And hey, since you’re not really human anyway …

It is here where we run into an idea that is self-evident to people who have dealt with this kind of violence. It’s by a fella by the name of Sir Basil Liddel Hart: It is folly to imagine that the aggressive types, whether individuals or nations, can be bought off … since the payment of danegeld* stimulates a demand for more danegeld. But they can be curbed. Their very belief in force makes them more susceptible to the deterrent effect of a formidable opposing force.

If we allow this concept to be true, we immediately run into a question. “Whose job is it to be that formidable opposing force?” Although that is kind of tricky phrasing because it shows another difference between dignity and honor. Another way to phrase it is “Whose responsibility is it?”

That same question also applies to preserving one’s dignity, status, rights and safety. Remember I mentioned twisting of the dignity idea? Well there are lots of ways this can happen, including “I have the right to act without consequence,” but that’s not the twist I want to talk about.

What I want to talk about goes deeper than that. It’s if you’re ‘born with these rights’ it is neither your job nor your responsibility to protect them. At least it’s easy to fall into this kind of thinking. Another variation is if it has to be done, hire someone to do it. You don’t have to think about these things because you pay someone else to do it.
As long as you stay firmly entrenched in dignity and individualistic environments you don’t have to worry about doing it yourself. (Or at least that’s what you tell yourself). It’s very easy to project the idea that it works everywhere (You don’t have to do it because we have police).

Thing is people who are part of honor cultures or have dealt with them — much less just plain evil fucks — recognize the inherent flaw in this kind of thinking. Because they know — to quote Hart — that the aggressive types are often waiting until the formidable force either isn’t looking anymore or is no longer formidable.

M *Danegeld (literally “Danish Gold”) the attempted bribes paid to the Danes to stop viking in other lands. The policy failed miserably. Not only did the Danes (are Hart points out) demand more, but they keep raiding. Then other ‘vikings’ started demanding payment as well — and still raiding.