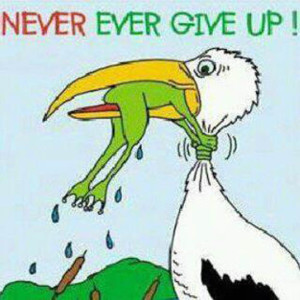 Self-defense “works” for the same reason that it doesn’t work and that underlying reason is because most people quit at a certain level of resistance or motivation.

All of the above are motivation driven actions. These actions require some type of motivation to continue. When this motivation is equaled or exceeded by a counter-motivation, the action stops.

Most attackers depend upon human nature. They know that most victims will give up with minimal resistance. But attackers are human too. That means they will also give up their attack at a certain level of resistance. Attackers and victims usually quit for the same basic reason. They fear the consequences of their actions. They quit because they fear that their continued actions may make the situation worse.

The majority of attackers are lowly motivated. That means it doesn’t take that much resistance to make them quit or to not get started in the first place. But since the majority of victims are selected as lowly motivated victims, the attackers are likely to prevail.  A victim usually quits in hopes of not being injured or attacked further. An attacker usually quits because he or she fears injury or societal intervention and punishment.

Quitting is not necessarily a conscious decision. People quit when guided by their subconscious too. Quitting can be a conscious strategy of submission or disengagement. It can also be an overwhelming instinctive “freezing” initiated on the subconscious level. It can be a habitual or conditioned response to certain environmental stressors.

Defending yourself against most lowly motivated attackers usually requires basic risk reduction, boundary setting, de-escalation, and deterrence strategies combined with a vigorous low skill physical defense and not quitting.  All of these actions have the effect of making your attacker quit before you do.

Defending yourself against a highly motivated attacker requires devoted training in self-defense methodologies, environmental and domain knowledge, and decision making. Most people will quit the training before obtaining useful proficiency.

Unfortunately, due to marketing demands and a curriculum driven by unrealistic student fears and expectations, many popular self-defense training programs start by focusing on how to deal with highly motivated attackers. Since most of the students will quit before obtaining useful proficiency, the majority of these trainees receive minimal benefit from their self-defense training.