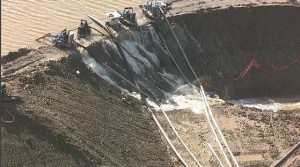 Imagine a brick wall. It’s a retaining wall. A dam that keeps a whole lot of nasty, nasty shit at bay.

One of those rows of bricks is rotten, dirty corrupt cops. Not just one brick but a whole row. Another couple of rows are the revenue generating bullshit that the local governments are forcing the cops to do. Then you got all kinds of financial and legal shit making up more rows.

Are these bad things? Yes. I’m NOT saying they aren’t. They are fucked up and we really have to find ways to keep this kind of shit from weakening and destroying the wall. Not just because it’s wrong and bad (ohhh outrage), but because it seriously weakens the wall.

But here’s something else. There are more rows of bricks that aren’t rotten. They — and that wall in general — are integral to holding back that shit and keeping it contained. You DON’T want this to burst out and fuck up everything. (In case you missed the comparison, Google “EPA, Animus River Spill”)

Now you got idiots out there who — because of their ideology and sense of entitlement – aren’t just demanding that those rotten bricks be replaced (which hey, pretty much nobody but those rotten bricks are against) but are going after the whole wall with picks and sledgehammers.
“Tear down the wall! The wall oppresses us. The wall takes away our freedom!”
“Bitch, do you know what that wall keeps back? Or what will happen if that wall gives way?”
“Uhhh no…but FREEDOM!”

Then there’s the problem of what you might want to call, “contractors.” These are people who want to keep on building onto that wall rather than repair it. They don’t care about repairing it, because the more they build, the more money they make. Unfortunately these contractors are often embedded in government bureaucracy.

Here’s the problem with that. The infrastructure that they keep on building on, can’t handle the load of all they want to add. But as long as the money keeps on rolling in, it can’t be bad right? In fact, let’s do some more because we can show the public how much we’re doing to protect them.

Then there’s the added problem of their happy little ‘look how much money we’re making’ creating more of the shit behind the wall. I’m not just talking about legitimate anger about using the cops as non-tax revenue generators. I’m talking about creating criminals through excessive civil ordinances, taxes and restrictions. You make so many laws that people have to break them to get by and then you reap in the fines. That just adds to the toxicity and volume of what’s behind that wall.

So you got an overburdened, weakening, retaining wall and a growing AND more and more toxic and nasty shit building behind it. Not good, not good at all.

Yeah, the wall is — in many ways — fucked up. We do need to repair it. My concern, is repairing it is going to be deemed not profitable enough, so they’re going to just keep on overbuilding. And at the same time — in the name of profit — creating more toxicity behind that wall

At the same time you have the idiots who are the sledgehammer brigade, going “wee-wee-wee isn’t it fun to try to tear down the wall?” They have no fuckin’ clue what’s going to happen if that damn bursts.

Oh yeah, here’s something else you might not have considered. You have a massive amount of toxic waste pushing from the other side. Now I’m not just talking about the cheerleaders who are egging on the the wee-wee brigade. Nor am I talking the opportunists who any time the wall cracks use the opportunity to loot, pillage and burn. I’m talking sheer volume. Raw numbers create incredible pressure against that wall as they go about their day-to-day business.

I tell people we have a professional, violent and armed criminal class in this country. They are responsible for most of the murders in this country. This is a bad news, good news situation. Bad news is they exist. Good news is they prefer to murder each other rather than you. As a general rule you gotta go swimming on that side of the wall to get hurt by them. But bad news, occasionally it slops over that wall and innocent people get killed too.

I am NOT happy with the condition of that wall. And for a whole lot of reasons.

Unlike so many other people, I have been on the ground when various walls have broken or sprung serious leaks. 2000-2010 was the first decade IN MY LIFE when I wasn’t in or within a few miles of rioting. I’ve seen what happens when that damn bursts. And it ain’t pretty.

I’ve also spent a whole lot of time swimming in the toxic wastes on the other side of that wall. You think corrupt murdering cops are bad? They ain’t nuthin’ in comparison to some of the monsters that live in that toxic waste. I’ve not only looked them in the eyes, but I’ve gone fang to fang with those monsters — and I barely survived. Anyone who
a) doesn’t believe they exist and
b) aren’t scared of these monsters, is an idiot.

I’m not normally confrontational or a name caller, but on that one I stand firm. I’ve got the scars, dead loved ones and trauma from a lifetime of dealing with the nasties on that side of the wall. I’ve been thumped by the cops. I’ve been taken more hits from thugs. I know people who have been beaten to the point of hospitalization or pissing blood by the cops, I know a whole lot more who ended up there because of what swims on that side of the wall. I’ve had those same folks try to kill me. Never had a cop try. I’ve known people killed by the cops. The body count of dead friends is a lot higher from criminals, gangmembers and thugs.

I’m not talking about hurt feelings, outrage about being hassled by the cops or for getting your ass arrested because you’re walking around with weed in your pocket or drunk in public. I’m not even talking about being set up by the cops. I’m talking blood and death. What’s on the other side of that wall is way more dangerous.

Or to quote Richard Pryor from “Live on the Sunset Strip” speaking about filming “Stir Crazy” in an Arizona Prison. “I went in there thinking ‘Free all the Brothers.’ but after talking to some of the people in there all I can say is ‘Thank god we have prisons.” Followed by “There was a guy who was in for killing five people in a house. I asked him why he’d done it. He replied ‘They was home.”

Yeah, I’ve dealt with those kinds of monsters. Fortunately they tend to limit their predations to behind that crumbling wall.

But most people have no idea what’s behind that wall. I know a lot of cop haters claim they do, but simply stated they’re talking out the side of their necks. There are three main reactions I’ve seen from people who have encountered the monsters
1) twitch in fear
2) the willingness to commit murder (put them down like rabid dogs)
3) accepting the need — while not liking the fucked up aspects — of the system.

Like I said, I’m not hot to trot to see that wall come crumbling down. I’d really rather we look at all the issues involved and see if there’s a way to repair it hopefully without creating a massive toxic spill. Because believe me when I tell you you don’t want this coming to your neighborhood.

Oh and two other points. One, I’m not a big fan of, nor am I advocating, vigilantism. That creates a whole set of other problems.

Two. When I say I’ve been to places where corruption by the police isn’t hidden… two points about that.
A- those places are serious shit holes. I mean life SUCKS.
B – groups band together to control areas. These groups are seriously bad news, like you want oppression and brutality against the population? They could give corrupt cops lessons.

So straight up, I have no better answer about what to do about this mess than to see what we can do about repairing the wall. Not build more or tear it down. It’s time we sit down and look at the problems from all sides — no matter how much that analysis might go against our cherished beliefs and narratives.