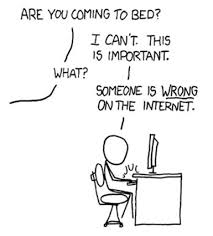 Anyone who has ever demonstrated a self-defense technique or concept via video has been subject to critical comments coming from people who can be best described as Keyboard Warriors. These people feel they have the unique combination of knowledge and physical skill that provides them the ability to cast judgment on the effectiveness of other people’s techniques.

The Keyboard Warrior watches the video and envisions himself as the “attacker”. He then imagines how easy it would be for him to vanquish the demonstrated defense. Since the Keyboard Warrior sees himself as an all powerful and a highly motivated fighter, he can’t conceive of how the demonstrated technique could actually work for other people in a scenario different than the one he envisions.

If the Keyboard Warrior actually had intelligence, he or she would realize that a video demonstration of a technique is inherently flawed. It rarely takes into consideration context. It also makes a whole host of assumptions particular to the situation demonstrated. Many demonstrated physical self-defense techniques maybe successful against low motivated attackers and unsuccessful against highly motivated attackers. Given that the majority of predatory attackers are not highly motivated, many so called “useless” techniques actually have some value in certain situations.

To all the Keyboard Warriors out there, please remember “Better to remain silent and be thought a fool than to speak out and remove all doubt”  – Abraham Lincoln, Mark Twain, or maybe someone else.