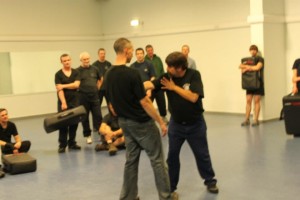 One of the problems you can run into is trying to come up with fantasy solutions to fantasy problems by over thinking things. Another problem is you can be blindsided by conditions you didn’t consider. Still a third problem is you try to find one technique that does everything (I call these Dr. Bonner Miracle Cures). A fourth problem is that traditional moves — that originally could handle a wide variety of things have been watered down, aspects lost and twisted for sports application. Now they no longer cover as many things as they once did. A fifth problem that you just didn’t do it right in the heat of the moment.

All of them can result in you spitting blood. The question is, which one was it that caused it?
(As an aside, 10,000 techniques for 10,000 unique problems creates it’s own kind of freeze. One where you have so many choices you don’t know what to do you you either stand there and do nothing or you flail as you try to do three techniques at once. That’s how fantasy solutions can get you hurt.)

One of the best lines I ever heard was “Your thinking is done in training.” Now, if it weren’t for the whole math thing, I would have been a scientist. I have a serious analytical, experimental and tinkering mind. So the thinking in training quote was a free pass to figure out, assess and experiment. Train for this! Train for that! Bullshit. Figure out why this works for that and why that doesn’t work for this. Can this be modified to cover that? What has been lost from that that used to cover this? Come to think of it, what has been lost from that that made it work (as in what they’re doing doesn’t – at all).

Let me give you an example. I used to HATE karate blocks. How did I develop this dislike? Well getting my ass beat trying to do them in fights had a lot to do with it. It would take me many decades to figure out that the reason they were failing wasn’t because of the technique itself, it’s how they were taught – and what happened afterwards. See to teach the technique, the moves had been broken apart. Then the parts were taught. Thing is, the techniques were never put back together. Or if they were, they were assembled with parts missing. These parts or non-operational versions were then taught as the whole thing. Mix this in with group movement and to keep the timing you get everyone pausing at the end of the move so you can ‘take a picture.’ That mental image of standing there at the end of the move morphed into what people think is the block. I guarantee you that shit isn’t going to help you against a boxer.

What has been lost? Well start with the end of the movement isn’t the block. The block is moving into that position. The key word there is moving. Oh yeah, that wind up movement that your oh-so sage and wise sensei dropped because it was wasted movement? Well, if it hadn’t been turned into a closed fist 20 years before he was born, he — and his instructors — might have figured out it wasn’t a wind up. It was a parrying action designed to handle faster incoming blows — like oh say from a boxer. But because he thought it was a useless wind up that just slowed things down, he dropped it. And now for something really bad, because when you have 50 people in a room doing kata all at once, for safety, don’t have them move that much. So the evasive footwork that goes with that ‘block’ is lost and now you’re left standing there against an incoming attack and trying to use only the slowest part of the technique to defend yourself.

But here is where it gets really pear shaped. Remember that end, take a picture pose? Yeah well by taking away the parrying aspects of the whole move, they shortened that last part to get it there faster. What used to be a wide sweeping action (that covered your whole body) got shortened down to a reduced angle to get it up there faster. A shortened angle that leaves you exposed on the other side. It’s not the angle of the attack that’s the problem, it’s that the defensive move has been shortened that it no longer covers all the angles. So anything that isn’t coming in on some specific angles is going to get through.

This information should have totally reframed your question. Because with shortened down and parts missing techniques left lead and right lead, right handed or left handed angles really do matter. In systems that still have those aspects, well not so much. Still not traditional, but classic systems still train you to function from both sides of your body. Why because you’ll find yourself in either lead, multiple times. (Or you won’t know what lead you’ll be in when things start).

Before you go looking for new and different, start examining what you already know for ways that you can fix it (Or reboot it to a previous, unmodified operating system.) That’s going to solve a lot of problems of left/right right there.

The analyzing and fixing process alone is going to get you thinking along the lines of understanding how things work, that’s going to boost your ability to quickly improvise on the spot. As in “I’ve never seen that particular attack before, but this move covers those angles.”