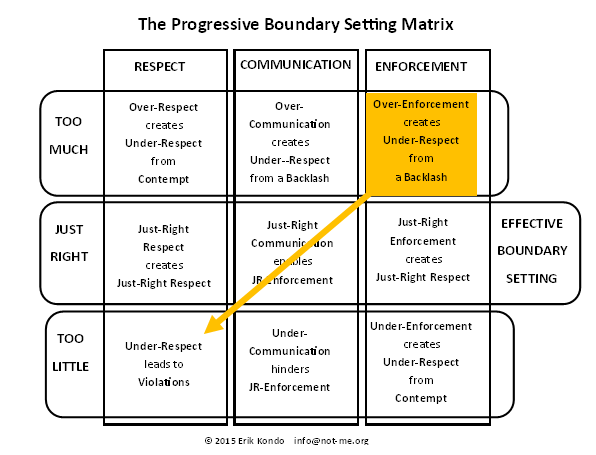 Some common words for Over-Enforcement are:

For example, in the 80’s cult classic movie the Breakfast Club, there is a scene that begins with Bender telling the Teacher to “Eat my shorts”. This was a violation of the rules of respectful student/teacher interaction. What follows is an escalating cycle of Violations and Over-Enforcements that result in everyone including the viewing audience to develop Under-Respect for the Teacher. But, most likely in the eyes of Teacher, his enforcement was Just-Right under the circumstances.

Below is video a backlash in the form of a mob beating of multiple police at a soccer game. Four police are seen tackling a running fan waving a flag. They submit him and one appears to repeatedly jab him with his club. In response to this perceived unnecessary use of force, one then two fans intervene. Within seconds, hundreds of fans and players have swarmed the policemen. The police are beaten as they try to flee to safety. At least one officer is severely injured in the melee.

Some of the fans believed that the action of the policemen was an Over-Enforcement for the violation of interfering with the game. This belief resulted in a Backlash and mass attack of the police. Had the police merely tackled the Fan and escorted him off the field, it is unlikely that a Backlash would have been created. Everyone knew the flag waving Fan violated the rules. The issue was the magnitude of the resulting enforcement of the violated rule.

This next video describes an incident regarding a school’s Zero Tolerance policy. The factual reporting of the incident may be inaccurate, but regardless, it serves as an example of Over-Enforcement.  Apparently, Student A took a razor away from Student B, who intended to cut herself. Student A then reported the incident and brought razor to the school Principal. Student A was subsequently suspended under the school’s zero tolerance policy regarding the possession of weapons.

The video commentators and presumably much of the video audience regard Student A’s punishment as an Over-Enforcement of the school’s ban on weapons. As a result, they have less support and Under-Respect for the school’s policy. The purpose of this video is to help build a larger backlash against Zero Tolerance in schools.

In these examples, the important point to keep in mind, is whether an enforcement is Too Little, Too Much, or Just-Right is in the eyes of the Beholders. And in these three cases, the enforcements used did not serve to create Just-Right Respect. They served to create Under-Respect via a Backlash. Thus, they are example of ineffective Boundary Setting.

This final video is a news story regarding a fatal shooting in a movie theatre that was the result of a conflict between two men over texting.

A Backlash created by the use of Over-Enforcement may come from the laws of society. In this case, Society is the Beholder and it casts judgement upon whether someone’s response was Over-Enforcement or not. The determination of the appropriate use of enforcement now becomes a legal issue. Therefore, it is important to clearly understand the legal consequences involved with the use of force, particularly deadly force.

Many times, Over-Enforcement is used by people who feel they deserve more Respect. As a result of feeling that they are Under-Respected, they see violations as being greater. Or they see violations that other people don’t see. This is the classic example of “Having a chip on your shoulder”.

Having a personal narrative that self-identifies you as an Under-Respected person or member of and Under-Respected Class also leads to the perception of more violations. You see the world not from rose colored glasses, but from disrespected glasses. Therefore, you are constantly enforcing what you consider to be violations of respectful behavior to you and/or your Under-Respected class. You see yourself as an innocent victim of other people’s wrongful behavior. As a result, you feel you must punish these wrongs.

The problem is that other people may be reacting to your behavior. They may not consider their own actions to be violations, only you do. Therefore, your enforcement responses are likely to be viewed as Over-Enforcement and create a Backlash. The end result is that your Boundary Setting efforts actually create less, not more Respect for you.