The Five Stages of Violent Crime is an internationally recognized system to identify if — and determine when and if — you are   being set up for a crime or violence. It is used by police, military and firearms instructors around the world as a training and  teaching tool. Also the system is taught internationally in self defense and crime prevention courses.

While we strongly advocate awareness and avoidance as a primary means for personal safety sometimes that isn’t enough. The Five Stages of Violent Crime has been tested in court as an easily explainable standard by which individuals determined if they were legally justified to use self defense tactics. Remember, when it comes to violence there are usually legal repercussions. Therefore we strongly advocate you know when you are justified to use force.

The Five Stages of Violent Crime:
Crime and violence are processes that take time to develop. The attack is not the first step, the preliminary triangle must be built. There are five distinct stages that are easily identified:

During the first three stages, you can prevent an attack without the use of violence. These are where the criminal (or violent    person) decides whether or not he can get away with it. He may want to (Intent), but if he doesn’t have the opportunity (Positioning) he cannot succeed. The Interviewis his way to double check if you are safe for him to attack. If these conditions are not met, he will not attack!

What we are about to say is not hyperbole. Selecting a safe victim is a matter of life or death for the criminal. If he picks the wrong target, he’s the one who is going to die. Therefore, he’s going to make sure he can successfully use violence against you (Interview and Positioning) before he commits himself to act. Once he is sure of his ability to succeed — and has put you in a    position where he can quickly overwhelm you — he will attack.

Below is a shorthand version of the five stages. Each is linked to a more in-depth look at the subject:

INTENT
By intent, we don’t mean that you are a psychic. You cannot read someone’s mind. Although the word ‘intent’ has often been replaced in court with Jeopardy (acting in a way that is consistent with known pre-attack behaviors) we still use the term ‘intent’ for a simple reason. With this system, intent is not what is going on inside of the person’s head.

It’s the visible and discernable physiological manifestations that, a person ready to commit violence, will display. This isn’t you being psychic. This is his body displaying these signs, no matter how hard he tries to hide it.

This is where the person crosses a normal mental boundary. From this point, the person is mentally and physically prepared to commit violence in order to get what he wants – whatever that may be. Being able to recognize when intent is present is one of the key components of your personal safety. yet, this isn’t always easy as you might think. The criminal has often learned how to mask it behind words and feigned innocence. But once you know how to spot the physiological signs, it is easily recognizable. Learn more about intent.

INTERVIEW
With all violence, the assailant’s safety is a critical factor in deciding whether or not to attack. While in interpersonal violence, the deciding factor may beanger, strong emotion or pride. However, with criminal violence it is more of a conscious decision. This leads us to the interview, where the criminal decides upon your suitability as a victim. There are several kinds of interviews common to criminal attacks

POSITIONING
This is the criminal putting himself in a place where he can successfully attack you. A criminal (or even a violent person) doesn’t want to fight you; he wants to overwhelm you. To do this, he has to put himself in a position where he can do it quickly and

effectively. An attempt to develop positioning is the final proof of ill intent. Someone trying to position himself to attack removes all doubt that the situation is innocent. Like the Interview, there are several kinds of Positioning.

ATTACK
The attack is the when the criminal/violent person commits himself to usingforce — or the threat of force — to get what he wants. Like the other stages there are important distinctions to be made about the kind of attack you will face.

Reaction is how the criminal feels about what he has done. However, this is made

more complicated by the fact that your reaction is an important contributing factor.

What follows is a parallel system to the Five Stages of Violent Crime. AOI stands for Ability, Opportunity and Intent. Although not as complete as the Five Stages, it will give you a quick-rule-of-thumb set of standards to determine whether or not you are in danger. While the Five Stages is more complete, for people who are not particularly interested in self-defense, AOI is a nice set of fast and easy guidelines. We present both models for you to select which works best for you.

There is a concept called the triangle among firefighters. Along each side is an element that a fire needs in order to burn. If you take away one of these elements, the triangle collapses and the fire goes out. Crime is the same: In order for it to occur, there must be three basic elements

This is easily remembered as A.O.I. (Ability, Opportunity and Intent). Take away any one of these elements and the triangle       collapses. In other words, the crime does not have what it needs to occur.

Ability: Does the person have the ability to attack you? Could this person successfully assault you, whether through physical prowess, a weapon or numerical superiority? Many women underestimate male upper-body strength and how vulnerable they are to being physically overwhelmed.

Opportunity: Does this person have the opportunity to attack you? Are you alone with him or even in an area beyond immediate help? Could anyone come to your assistance within twenty seconds or less? As many victims have found, you can be robbed in plain view or raped with people in the next room.

: Is he in a mental place where using violence to get what he wants makes sense to him? 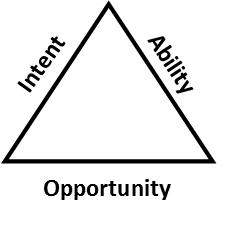 Of the three, intent is the most nebulous, yet it is vital for determining who is a threat. It is the literally the difference between going off with someone to talk and being raped. Skip over to Intent page and to the profile of a rapist. Acquainting yourself with the criminal mindset is also highly recommended.

The fastest way to figure out if you are in potential danger is to look for these three elements. If you see one, look for the others. If you see two out of three stop whatever else you are doing and pay close attention for a moment. If you see him trying to develop the third, withdraw from the situation to a safer area. This is easier than using physical violence. As you will soon see, opportunity often means staying in an area where someone could effectively use physical violence against you. If you do not see these elements then odds are you are safe. There is no triangle.

If you wish to adhere to a more legally sanctioned idea, you can exchange the I of Intent for a K of Known (for known dangerous behavior = jeopardy). This turns it into the acronym A-OK. Which might be easier for someone to remember.

Conclusion
Knowing the five stages is a standardized guide by which you can assess the potential threat of a situation. These five stages are inherent within crime and violence. What is important to realize is that the first three stages might not occur in that particular order. A violent and selfish person may suddenly find himself with the perfect opportunity/ability to commit a rape, and suddenly the intent appears. There was no conscious initial decision, but the circumstances developed. Due to an intrinsic flaw in his personality, he can decide to act in a violent manner. This is why you always need to check for ability, opportunity and intent (AOI).