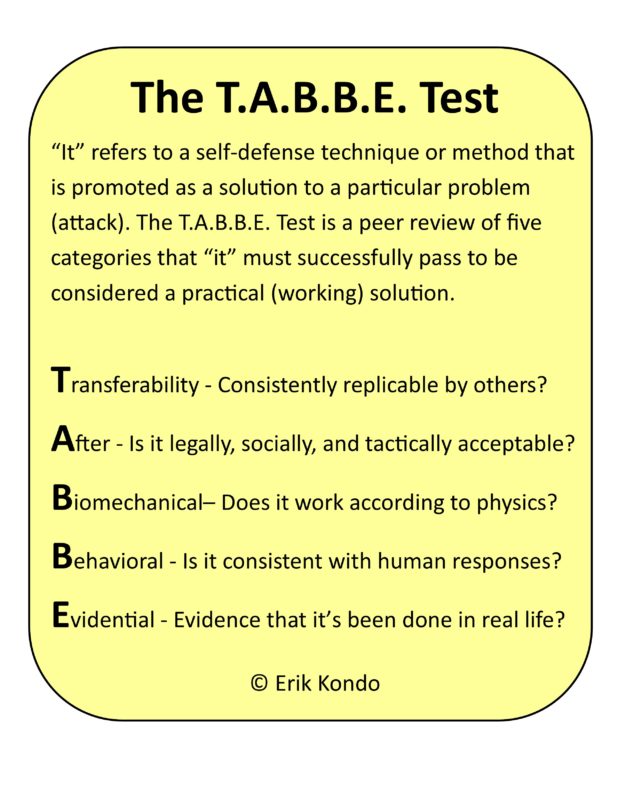 There a few things that create more commentary than instructional videos of self-defense techniques. The question of whether or not something works is hotly debated. These discussions/arguments rarely follow a logical order. Conclusions are not arrived at. Most comments are repetitive and reductive.

The purpose of the T.A.B.B.E. Test is to enable the Peer Review of self-defense techniques, tactics, and methodologies (IT) in order to determine a consensus on their viability in actual use. The T.A.B.B.E. Test takes into consideration five main categories that must be passed.

It is important to keep in mind that an instructed technique is NOT a demonstration of what is theoretically possible. It is a recommendation of what someone “should” do in a certain situation. Therefore, such a recommendation must have a high degree of reliability. If the technique/move in question is not reliable, then it is irresponsible to teach it.

1. TRANSFERABLE refers IT’s results being applicable and repeatable by other people on a consistent basis. If other people of a similar demographic are unable to achieve reliably similar results in a controlled setting, IT fails. Transferable also refers to the ability to reasonably train IT under somewhat realistic conditions.

3. BIOMECHANICAL – IT must also work in accordance with the laws of physics and human mechanics. In other words, if IT involves a takedown, then there must be physical reasons why the opponent goes down. If not, IT doesn’t pass.

4. BEHAVIORAL – IT must be consistent with how humans actually behave given their psychology, physiology, and behaviors. If IT doesn’t take into consideration instinctive responses, social conditioning, the effect of emotions, and bodily functions, then it fails.

5. EVIDENTIAL – There should be evidence that IT works in real-life. This evidence can come in the form of personal testimonies of use, video/pictorial evidence, or at the very least, people with actual conflict experience must agree that IT is consistent with their experiences. Lacking in this area means that IT is theory based and doesn’t pass.

If IT passes all five of these categories on a peer consensus basis, then IT can be considered to be generally reliabile, but still subject to failure on a individual/circumstancial/percentage basis