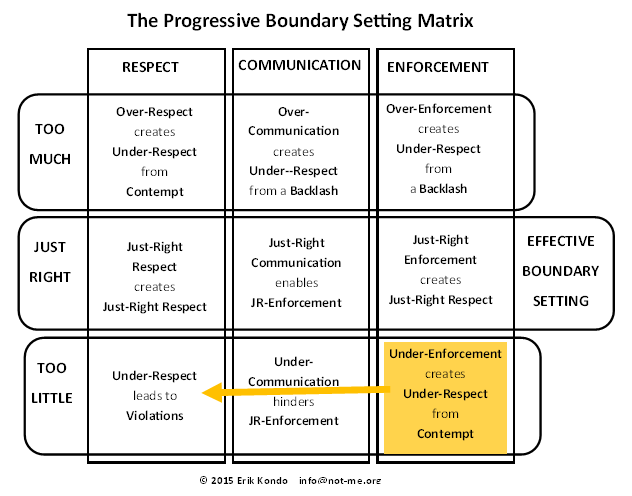 Some words for Under-Enforcement are:

These words all represent an emotional reaction. Under-Respect is not based on logic. It would be logical to assume that if someone is “too nice” to you, then you would respond in kind. But, people tend to take advantage of people who are too nice to them. When it comes to dealing with a violation of the rules, Under-Enforcement does not create the deterrent necessary to change unwanted behavior.

Under-Enforcement provides the opportunity to step up to Just-Right Enforcement. But Over-Enforcement is harder to step down from. Therefore, it is generally better to start low and move progressively (rapidly if necessary) higher. Than to start high and try to move lower. Once a Backlash has been created it is difficult to dissipate it. Contempt on the other hand, is easier to erase with a higher level of enforcement.

For example, you might speed at the threat of a $50 dollar fine. But as the fine increases, it is likely to create a greater and greater deterrent. The point at which the fine changes your behavior to following the speed limit is Just-Right Enforcement.

The following video is an example of how Under-Enforcement by the police, led to the rioters attacking them in mass.

This next example shows a domestic violence situation where the boyfriend is repeatedly slapped. He makes no attempt to enforce his personal boundary of acceptable behavior. Clearly, his girlfriend has Under-Respect for him.

This next video shows an old man who is repeatedly touching women as they pass by him. There is no enforcement of his unwanted behavior, so he continues to do it. Enforcement could come from the victims, or it could come from bystanders, or the police.

Another systemic boundary setting failure occurs among people who are overly afraid of creating a Backlash via Over-Enforcement. These people will consistently Under-Enforce due to fear of Over-Enforcement. They don’t progressively increase their enforcement level to reach Just-Right Enforcement. As a result, the create Contempt. This contempt leads to further and most likely more severe violations of behavioral rules.

A common example of this situation, is a young socially conditioned woman, who is afraid to assertively standup to a man who is giving her unwanted attention. Her fear of making him angry leads her to behave in a passive submissive manner. The man, seeing that he can break her personal boundaries without consequence will now have a greater level of Under-Respect for her.

This final video shows the abduction of Carlie Brucia who was later found raped and murdered.

NOTE: Many people’s lifetime of social encounters have conditioned them to respond in a certain manner to conflict. Most likely, this response proved to be successful in most social situations. Thus, it has become the person’s default response. The problem arises when the conflict is not social, but asocial/predatory. In this situation, social responses of passive Under-Enforcement and/or verbal Over-Communication are likely to lead to a disastrous result.