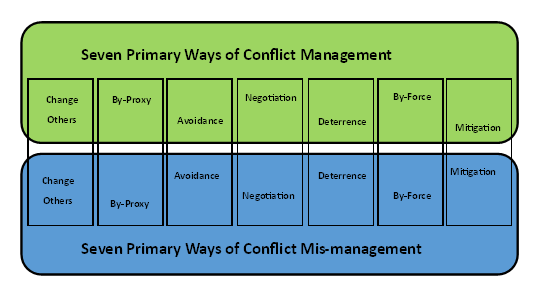 There are seven primary ways of Conflict Management. They are Change Others, By-Proxy, Avoidance, Negotiation, Deterrence, By-Force, and Mitigation.

There are seven primary ways of Conflict Mis-management. They are Change Others, By-Proxy, Avoidance, Negotiation, Deterrence, By-Force, and Mitigation.

Does that mean you have a one in seven chance of selecting a way that works during a conflict? No, it doesn’t. Depending upon how you look it at, those seven primary ways can be combined and ordered to form dozens of useful secondary ways.  First example, Avoidance –> Negotiation -> By-Force is different from Deterrence -> By-Force–> Mitigation which is different from Change Others -> By-Proxy.

Does that mean you have a one in a few dozen chance of selecting a way that works? No. There are many ways in which a conflict can be managed. And many ways that will led to conflict mis-management. Think of it as a maze with many routes that lead to the exit and many routes that led to dead ends. Some routes may be more efficient than others in getting you to the exit. Some routes will bring you to the dead end faster. Some will get you close to the exit, but force you to turn around.

What you are dealing with is probabilities, not certainties. There is no guarantee that any one way will work or that anyone way will not work. But they are ways that have a higher or lower probability of working in any given situation.

For example, assume that using Negotiation works 80% of the time. But there are those 20% of the situations where verbal negotiation will not be enough. In fact, in a few of those 20%, negotiating may be the worst thing you could do (dealing with Process Predator for instance). The use of By-Force may work for you the majority of the time, but when it fails, you may end up dead or seriously injured.

For example, calling someone an “asshole” has a low probability of working and a high probability of not working most of the time in most situations. But there are situations where that type of verbal utterance is just what is needed to stop someone’s bad behavior.